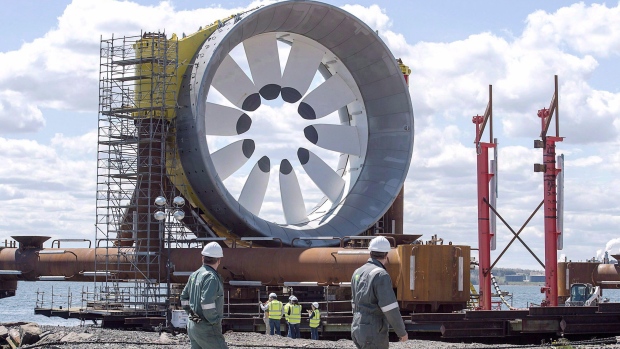 A turbine for the Cape Sharp Tidal project is seen at the Pictou Shipyard in Pictou, N.S. on Thursday, May 19, 2016. , The Canadian Press

HALIFAX -- Nova Scotia's bid to become a world leader in tidal energy has been dealt a major setback, but industry experts say a French firm's decision to pull out of a pioneering Bay of Fundy project may ultimately be good for the emerging industry.

"When the leading technology developer exits the field, it's a concern," Dempsey said in an interview Monday. "There's no way to diminish that. It will have immediate negative consequences. The question is whether it is short-term or long-term."

Last week, Cape Sharp Tidal successfully connected a massive, two megawatt in-stream tidal turbine to Nova Scotia's electricity grid. It was the second time that Cape Sharp has installed a turbine on the floor of the Bay of Fundy to generate electricity from the world's highest tides.

In a historic first, Cape Sharp's first turbine was hooked up to the grid in November 2016, but it was later removed for inspections and servicing in June 2017.

In 2009, an in-stream prototype was torn apart by the bay's powerful currents, which can move at 18 kilometres per hour.

Naval Energies, considered a leader in the field of renewable energy, issued a statement last week saying it had stopped investing in tidal energy in Canada and in other locations, and was instead focusing on floating wind turbines and ocean thermal technology.

"The deterioration of the market, in France and around the world throughout the recent months, has been reflected in a lack of commercial prospects over the long term," company CEO Laurent Schneider-Maunoury said in a statement.

The company also complained that in Canada "there is also great sensitivity to the cost of the technology."

Cape Sharp is a joint venture between OpenHydro and Halifax-based Emera Inc.

However, she said such setbacks are to be expected in an emerging industry.

"It has happened before in this industry and other innovative sectors, and is a natural part of industry development," she said in a statement.

"The association feels strongly that there is great opportunity in this industry with many promising projects on the horizon. Tidal energy is on the cusp of becoming a viable industry."

With OpenHydro now in the midst of bankruptcy protection, it will be up to the receiver, Grant Thornton in Ireland, to determine if a new owner can be found for the project.

So far, officials with Emera Inc. have said little about what they plan to do. The company, which is the parent of the utility Nova Scotia Power Inc., issued a statement Monday saying Emera continues to believe in the potential for ocean energy.

"These are still early days for a sector that is still emerging," said spokeswoman Stacey Pineau. "The industry continues to learn and innovate so it can ultimately develop technologies that produce affordably-priced energy for consumers."

She said Emera's biggest concern was ensuring the receiver has a plan for environmental monitoring and safe operation of the turbine.

Both Dempsey and White stressed that the end of Naval Energies' involvement in tidal energy did not mean the end of research and development in the Bay of Fundy.

Dempsey said a number of smaller companies are moving ahead with less ambitious projects.

"There was never any certainty that (Cape Sharp) would be successful," he said. "All of this feels kind of strange right now, but it was kind of anticipated. Often in technology developments, it's the disruptive technology that ends of being successful. The big ones sometime start up and fail, and then others come forth."

In the coming weeks, U.S.-based Bigmoon Power is expected to deploy a 100-kilowatt prototype in the bay, using an onshore generator that is connected by high-strength ropes to a barge that will move with the tides.

Meanwhile, Black Rock Tidal -- a subsidiary of Schottel Hydro of Germany -- is hoping to deploy a floating array of 40 small turbines that will be anchored to the floor of the bay.