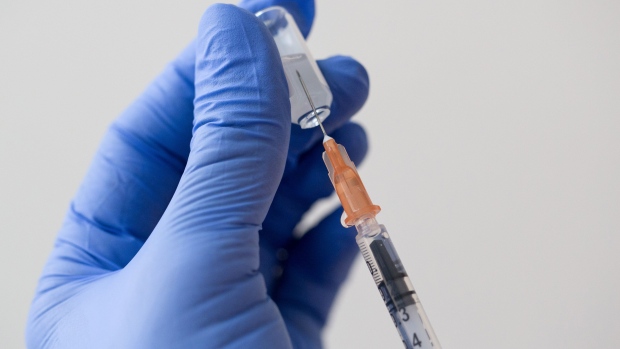 A medical worker draws liquid from a vial with a syringe in this arranged photograph taken at the Chaika Clinic in Moscow, Russia, on Monday, Aug. 10, 2020. Russia registered its first coronavirus vaccine, President Vladimir Putin said during a televised meeting with the government. Photographer: Andrey Rudakov/Bloomberg , Bloomberg

Novavax Inc. climbed as much as 6.7 per cent in extended trading on plans to start enrolling participants for a late-stage study of its experimental shot for the novel coronavirus in 10,000 patients in the U.K.

The company joins the ranks of AstraZeneca Plc, Pfizer Inc. with German partner BioNTech SE and Moderna Inc. as its vaccine enters the final stretch on the path toward regulatory approval. There are roughly 38 shots being tested in humans around the world and more than 140 others in earlier stages of study, according to the World Health Organization’s estimates.

Half of the people enrolled in Novavax’s placebo-controlled trial will get two shots of NVX-CoV2373 with Matrix-M, the biotech company’s adjuvant meant to make the immunizing shot more powerful. At least a quarter of study participants will be seniors, and priority will be given to enrolling racial and ethnic minorities hardest hit by the virus.

The study has a two-pronged target to show effectiveness in those with symptoms of the disease or in moderate to severe COVID-19 patients, and achieving either goal may be enough to get a regulatory nod. Up to 400 people in the study will also get a seasonal flu vaccine to gauge the potential of administering a COVIDshot alongside a flu shot.

Novavax shares rose as much as 6.7 per cent to US$109.31 in postmarket trading in New York.

The Gaithersburg, Maryland-based company secured a US$1.6 billion U.S. contract in July on top of US$388 million in funding from the Coalition for Epidemic Preparedness Innovations in May.

“We have three shots on goal,” Gregory Glenn, the company’s president of research and development, said in a phone call, referring to other Covid-19 trials. Planning is also underway for a larger, 30,000 person study in the U.S. that will start enrolling in mid-October, while a smaller Phase 2b study in South Africa is ongoing.

As drug developers large and small race to come up with an effective inoculation, Novavax has seen its stock price climb nearly 2,500% this year on its rapid progress against the disease. Since revealing a first look at Novavax’s shot in people in August, the stock has given back roughly 40 per cent of that surge in shares. Day trader interest in vaccine and Covid-19 medicines faded from frenzied levels earlier this year as virus rates in the U.S. eased over the summer. So-called biotech tourists may also lose interest as a company gets closer to commercialization.