Novavax Inc.’s COVID-19 vaccine results are expected imminently and scientists will be scanning the data to gauge the shot’s promise. At the same time, day traders — who’ve snapped up shares since March — will be looking for the more than US$7-billion surge in value to hold.

Vaccine candidates presented so far have detailed initial patient antibody and T-cell responses and compared them with levels seen in patients who have recovered from the virus. Investors will be looking for those initial immune-system responses when Novavax reveals its data, likely sometime next week.

Novavax is on its way to becoming a household name similar to Moderna Inc., another vaccine developer that has rallied since March but has yet to have a product reach the market. Recent US$1.6 billion funding from the U.S. government has bolstered Novavax’s credibility despite some concern over its use of industry ties to get that backing. 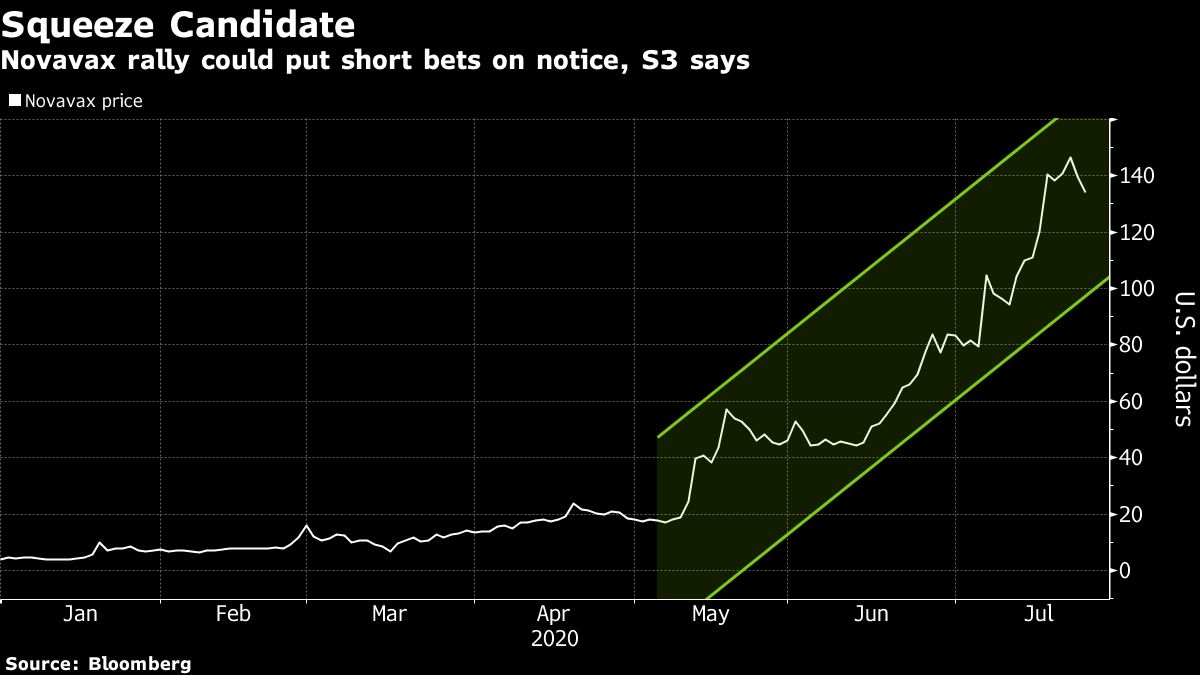 The need for a vaccine is clear, with COVID-19 cases in the U.S. reaching beyond four million and the virus on the rise across the Sunbelt. There are roughly 25 vaccines in human testing with more than 140 others in earlier stages of development, according to the World Health Organization.

The market has responded positively to some of the first results in people from Moderna, as well as Pfizer Inc. and BioNTech SE’s messenger RNA vaccines. AstraZeneca Plc’s experimental shot with the University of Oxford was compared less favorably by some on Wall Street. Biotechs that didn’t provide sufficient detail have given back some of their share gains.

Novavax’s vaccine — NVX-CoV2373 — uses insect cells to grow key proteins and the company has said it could be easier to mass produce than some rival shots. NVX-CoV2373 is being tested in a two dose regimen, with some patients getting a formulation enhanced with the company’s proprietary plant-based nanoparticle technology meant to further stimulate an immune response.

Results so far have measured these immune responses at different time points and using different measures, making them difficult to compare.

“It’s an imperfect situation,” said Steven Seedhouse, an analyst at Raymond James in a phone call. “There’s data out there, to the extent you can you do your best to interpret it.”

JPMorgan Chase analyst Eric Joseph was also positive on Pfizer’s vaccine. Its results that generated virus-neutralizing antibodies as much as threefold higher than those found in patients who had recovered from COVID-19 create “a challenging setup” for Novavax.

Safety, of course, is paramount for vaccines given to healthy people, and results in the leading candidates so far haven’t raised any major red flags.

However, Joseph, who is neutral on Novavax, cautioned on potential tolerability issues. Its COVID-19 vaccine uses the same technology that’s in its still experimental flu shot, which has shown more adverse events after treatment than a comparative flu shot, Joseph wrote in a note to clients.

Still for bears betting against the company, the stakes are high. Short sellers have lost just over US$1 billion this year, according to Ihor Dusaniwsky, managing director for predictive analytics at S3 Partners. With about US$1.3 billion of shares sold short, the stock is a prime squeeze candidate, according to his analysis.

Vaccine stocks, including Novavax, show options investors are positioning for an imbalanced risk that shares will post outsize gains, according to Goldman Sachs analysts led by Terence Flynn. Call options on COVID-19 stocks like Novavax are “unusually expensive” compared with puts, they said.

Options data imply Gaithersburg, Maryland-based Novavax could move an additional 14 per cent through July 31. Investors trying to get ahead of stock moves should also watch shares of a Novavax partner, Emergent BioSolutions Inc., which provides manufacturing and development services out of a handful of sites in Maryland.