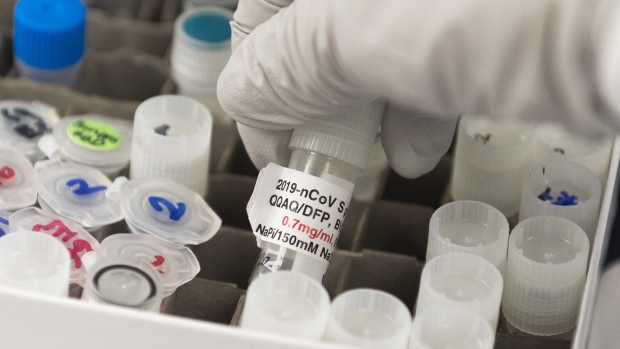 Dr. Nita Patel, Director of Antibody discovery and Vaccine development, lifts a vial with a potential coronavirus, COVID-19, vaccine at Novavax labs in Rockville, Maryland on March 20, 2020, one of the labs developing a vaccine for the coronavirus, COVID-19. , Andrew Caballero-Reynolds/AFP via Getty Images

The stock surged as much as 21 per cent, after sinking in extended trading Tuesday. Novavax has rallied more than 4,300 so far this year on speculation about the potential for its vaccine.

Results presented on Tuesday evening from a two-injection regimen when administered concurrently with Novavax’s immune-boosting technology generated antibody responses that were four times higher than those seen in people who had recovered from the disease. Some of the healthy adults in the study experienced side effects including fever, headache and fatigue.

Confusion over the vaccine’s safety data arose after a media report incorrectly said trial participants were hospitalized with severe reactions. The vaccine appeared safe in the more than 100 patients who received it, according to the company. Reactions to the shots were generally mild, lasting two days or less. One patient getting the vaccine had a mild skin infection that was determined not to be related to the shot.

Gregory Glenn, Novavax’s head of research and development, said adverse events were “sporadic” and spread across placebo as well as vaccinated patients in the study.

Responses were similar across doses, meaning it may be easier for Novavax to manufacture. Dosing has been a key advantage the company has been touting along with less stringent guidelines on temperature, considering the widespread need for shots. There are more than 160 different shots in various stages of testing: Novavax joins the ranks of AstraZeneca Plc, Moderna Inc. as well as Pfizer Inc. and BioNTech SE which have all reported Phase 1 results from their inoculations.

The results were enough for JPMorgan analyst Eric Joseph to raise his rating to overweight from neutral and set a Street high price target of $275. “We’d still caution against reading too concretely across the various CoV2 vaccine datasets,” he wrote in a client note, though its not a stretch to conclude neutralizing antibody activity of NVX-CoV2373 “looks best-in-class.” Five analysts rate Novavax a buy, while one recommends selling the stock.

Novavax’s reputation got a boost in early July when the biotechnology company secured a $1.6 billion contract from the U.S. government under Operation Warp Speed. It was the largest U.S. award until a $2.1 billion award to Sanofi and GlaxoSmithKline Plc topped it a few weeks later. A former Glaxo executive, Moncef Slaoui, heads Operation Warp Speed. The program is part a Trump administration push to get a vaccine ready for wide use.

The Gaithersburg, Maryland-based company previously said a late-stage study would start in the fall. “We get it, it’s urgent,” Glenn said in a phone interview. The data first need to be filed with the Food and Drug Administration before Novavax can determine if the shot can be moved into late-stage testing any earlier, he said.

The results will be submitted to a leading peer-reviewed journal. Novavax is partnered with another Maryland-based company, Emergent Biosolutions Inc., to manufacture its vaccine.