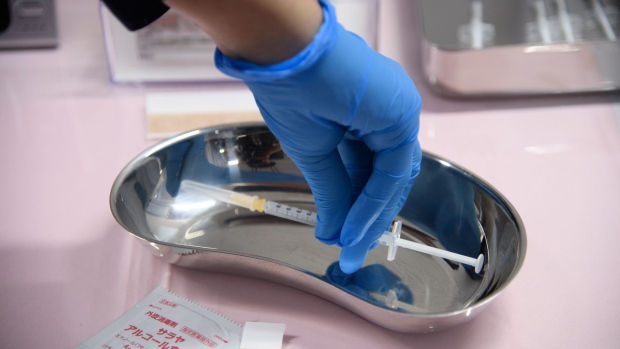 A health worker handles a syringe filled with a dose of the Moderna Inc. Covid-19 vaccine at a vaccination site set up at Haneda Airport in Tokyo, Japan, on Monday, June 14, 2021. Japanese Prime Minister Yoshihide Suga said during a parliamentary debate last week that he wants to finish inoculating everyone in the country who’s willing to get a Covid-19 vaccine by October or November, citing progress made in the vaccination drive so far. Photographer: Akio Kon/Bloomberg , Bloomberg

(Bloomberg) -- Novavax Inc. said it has filed with the World Health Organization for an emergency-use listing for its Covid-19 vaccine, a move that could help its shot reach more people at a time of vast global disparities in immunizations.

The U.S. will require politically contentious Covid-19 vaccinations or at least weekly testing by Jan. 4 for workers at companies with 100 or more employees. Some states have vowed to sue.

The WHO warned European governments to fight against a surge in cases on the continent that has returned the region to the pandemic’s epicenter. The U.K. became the first country to approve Merck & Co.’s Covid-19 antiviral pill.

A White House aide who accompanied Joe Biden to international summits in Europe last week tested positive for coronavirus infection before the president returned to the U.S., according to people familiar with the matter. The aide isn’t believed to have had close contact with the president.

The aide and some of Biden’s other traveling staff remained in Scotland after the president attended a United Nations climate summit in Glasgow because of concern about transmission, the people said. The exact number of staff involved is unclear, as is their current condition.

Almost two weeks before Chile’s presidential election, one of the candidates has contracted Covid-19, sending five of his opponents into quarantine and forcing campaigning to go virtual.

Novavax Inc. requested an emergency-use listing for its Covid-19 vaccine from the World Health Organization, saying its shot provided 100% protection against moderate and severe disease and had 90.4% efficacy overall.

While Novavax has experienced production setbacks that prevented its shot from being a key player in the U.S. vaccination drive, it has been moving to gain access to more markets in other countries including Indonesia earlier this week.

Arizona, Florida, and Missouri have vowed to sue the Biden administration Friday to block an emergency rule mandating workplace Covid-19 vaccination or testing, with more lawsuits expected from Republican-led states and industry groups.

Attorneys general in those three states said they’ll file lawsuits early Friday, when the rule is officially published and will take effect. Ohio and Indiana’s attorneys general also have pledged to challenge the regulation in court. Alabama and Georgia are expected to join Florida’s suit.

Many international flights are expected to operate at 100% capacity on Monday, the first day of the reopening, the airline said in a statement. The White House said on Sept. 20 that the U.S. would reopen to travelers from travelers from countries including much of Europe, China, Brazil and India.

U.S. cases increased by 1.1% during the week through Tuesday compared with the preceding seven days, according to a Centers for Disease Control and Prevention report.

The case surge in Europe despite its access to vaccinations should be a warning shot for the world, a World Health Organization official said at a media briefing Thursday.

Amid a wrong perception that the pandemic is ending, governments may be hesitant to make moves that seem like steps backward to their populations, according to Mike Ryan, head of the WHO’s health emergencies program.

“Every country needs to look at its strategic preparedness and response plan and look at the gaps in the system that exist right now and plug those holes,” Ryan said. “Every country needs to ensure they can get through the next few months without systems going into collapse again. In many countries, that will require a course correction and a real focus on ensuring every person has had full vaccination.”

A return of American tourists helped bump up the number of visitors to the Eiffel Tower in Paris to pre-Covid-19 levels last month, Agence France-Presse reported, citing the landmark’s operator, Sete.

The number of visitors in October topped 20,000 a day and were “better than in 2019 on the weekends,” AFP cited Sete as saying. Over the summer, the site received about 13,000 visitors a day, compared with 25,000 before the crisis as the numbers were capped by health restrictions -- including a 50% limit on the number of people allowed in elevators.

The Pfizer-BioNTech vaccine helps prevent severe symptoms among those infected with the delta variant, according to research involving 1.2 million medical insurance plan members in South Africa.

The Pfizer vaccine is 73% effective in protecting against hospital admission two weeks after the first dose, and 92% after the second shot. Unvaccinated members had a five times higher risk of infection and a 20 times risk of dying from complications of an infection.

New York Governor Kathy Hochul said she is in favor of getting rid of school mask mandates when the time is right, but there isn’t a “magic number” on how many children need to be vaccinated before mask mandates are lifted.

“I do want to give parents and kids that sense of hope,” she said at a webinar on Thursday. “This is not a permanent situation, the mask will come off.”

New York will continue to work on creative ways to encourage families to get their children vaccinated, she said. “I’ll be waiting for the CDC to help us declare when this is over.”

New York City began offering shots for kids ages 5-to-11 on Thursday at city-run sites, where youngsters are eligible for a $100 incentive, Mayor Bill de Blasio said in a briefing.

Next week, each public school with students in the age group will have a vaccine site for at least one day, the mayor said. When asked what threshold of vaccinations will be needed for schools to drop mask requirements, de Blasio said that out of an abundance of caution, schools will keep masking at least in the short term.

The city has ordered about 330,000 doses that have either arrived or will be coming in the next few days, Health Commissioner Dave Chokshi said.

AstraZeneca is submitting a data package to the European Medicines Agency today that could support the use of its Covid-19 vaccine as a booster shot, according to Marco Cavaleri, the head of biological health threats and vaccines strategy. The EMA will discuss with the company whether the data are sufficient or more evidence is needed to conclude whether it can be approved as a booster.

The Occupational Safety and Health Administration issued a federal rule mandating Covid-19 vaccinations or at least weekly testing for workers at U.S. companies with 100 or more employees.

The first compliance deadline for employers -- providing time off for workers to get inoculated and ensuring those who aren’t vaccinated are wearing masks -- is Dec. 5. Workers must be fully vaccinated by Jan. 4 or submit to testing.

The World Health Organization warned that a surge of coronavirus cases in Europe and Central Asia pushed the region back as the epicenter of the pandemic.

There are now 78 million cases in the European region, higher than infections reported in Southeast Asia, the Eastern Mediterranean, the Western Pacific and Africa combined. Last week, Europe and Central Asia accounted for almost half of the world’s reported deaths from Covid-19.

Britain’s regulator became the first in the world to approve Merck & Co.’s Covid-19 antiviral pill, describing the treatment as safe and effective following a swift review.

The drug, molnupiravir, was authorized for use in people with mild to moderate Covid and at least one risk factor for developing severe illness, the U.K.’s Medicines and Healthcare Products Regulatory Agency said Thursday.