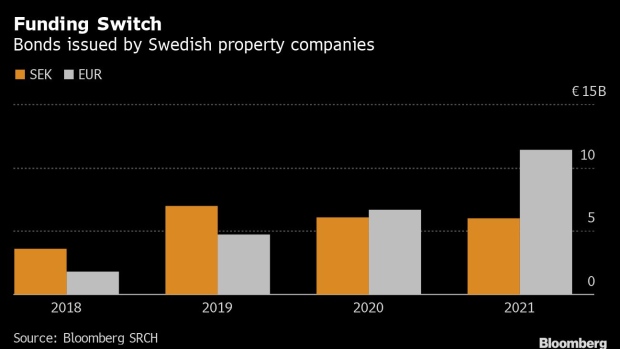 (Bloomberg) -- A historic shift in how Swedish property firms fund themselves was already underway before a little-known private company revealed a $10.7 billion acquisition that will put the trend firmly on the map.

Heimstaden Bostad AB -- owned by Ivar Tollefsen’s Fredensborg AS and pension funds -- says it will use debt capital markets to refinance a jumbo bridge facility for the largest ever private property transaction in the Nordic region.

The deal highlights a shift by real estate companies in the biggest Nordic economy into both bonds and euros. The trend is driven by a quantitative easing-fueled property boom that’s allowing companies to raise more money than is available in the local market.

“The real estate sector has grown so much because companies have replaced secured bank financing with unsecured bond financing,” said Max Berger at DWS Investment GmBH. More broadly, Europe’s property industry has become “the fastest growing in euro investment grade in the last couple of years.”

Since 2010, the number of real estate issuers in the euro investment grade market has increased to 69 from five, according to Berger, who manages 6 billion euros ($7 billion) of bonds. Euros have now overtaken Swedish krona as the main funding currency for outstanding bonds sold by the country’s property companies.

The boom in real estate bonds can be seen in its dominance of the Swedish central bank’s balance sheet, where more than half of the Riksbank’s corporate bond holdings come from property companies.

The European Central Bank’s bond-buying program is adding further fuel to the market, according to Holmlund.

And the broader buyer base is allowing Swedish property companies to expand massively. Samhallsbyggnadsbolaget i Norden AB, for example, announced a plan recently to nearly triple its property portfolio size to 300 billion kronor ($34.4 billion) by 2026.

“We will focus more on euro in the future,” Marika Dimming, a spokesperson, said in an interview. “It’s a natural progression for us,” she said, adding that “the trend is also to set up a subsidiary in the euro area so that the bonds can be bought by the ECB in their QE program,” she said.

But a summer rally in Swedish house prices, warnings of excessive valuations in share prices and concerns about a withdrawal of central bank stimulus have stoked concern among politicians and analysts alike.

Equity analysts at Svenska Handelsbanken said they have “a clear negative tilt towards the sector universe,” citing “disturbances in the increasingly important capital markets” triggered by QE tapering as a possible downside catalyst.

“Nordic players have provided us with interesting sub-sectors that have defensive characteristics, but trade in line with the wider sector,” the Frankfurt-based portfolio manager said, adding that sub-sector selection within real estate is key to making profitable investments.

“The pandemic has been a good stress test for real estate companies’ balance sheets,” he said. “Even hotel and retail focused companies have weathered the pandemic.”