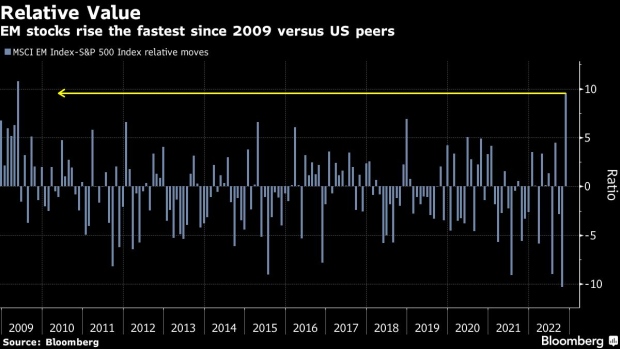 FRANKFURT AM MAIN, GERMANY - JUNE 29: A trader looks at computer screens as the day's performance graph showed a sharp drop of the German DAX stock market index early today and a partial recovery later on the day after the European Central Bank announced it would not extend emergency funding to Greece on June 29, 2015 in Frankfurt, Germany. Meanwhile the Greek government ordered cash machines turned off and a tightening on the flow of capital in an effort to staunch citizens' withdrawals. (Photo by Thomas Lohnes/Getty Images) , Photographer: Thomas Lohnes/Getty Images Europe

(Bloomberg) -- November has given a glimpse of the outperformance that emerging markets can deliver in the post-stimulus world as the maturing phase of Federal Reserve tightening focuses investors’ minds on the opportunities beyond.

Stocks, currencies and local bonds in developing nations rallied this month by the most since March 2016, a period that heralded the biggest gains since the commodity boom of the early 2000s. That helped the benchmark gauge for emerging-market equities to surpass the S&P 500 Index by the most since the global financial crisis, while dollar-denominated bonds advanced the most since then.

Assets in poorer nations have underperformed their US peers for most of the past 14 years as they received little more than a trickle of the vast Fed stimulus, most of which went on to bolster the US markets. The dollar’s relentless march from one record high to another kept a lid on risk appetite even as debt crises in smaller countries, China’s economic troubles and the Covid pandemic sparked frequent meltdowns in emerging economies.

That narrative began to shift this month. The world’s top money managers including Morgan Stanley predicted a peak in the dollar and a paradigm change that will benefit emerging markets. With early rate hikes and a selloff that began a year before it reached rich nations, developing nations had already priced in the Fed hiking cycle and were too cheap to ignore. When the risk-on shift came after signs of moderating US inflation, they rapidly began trimming the losses suffered earlier this year.

“We see grounds for a recovery in emerging markets,” Morgan Stanley strategists including Andrew Sheets wrote in their 2023 global strategy outlook. “First, we expect to see the conditions for the dollar to weaken, which is always a helpful starting point. Global growth recovers from its low point in the first quarter through to the end of the year, led by emerging economies.”

The MSCI Emerging Markets Index has risen 12% in November, the biggest advance since March 2016. That’s almost double the pace of gains in the European equity benchmark and five times as fast as the S&P 500. The ratio between the EM and US equity gauges has jumped 9.5% this month, the fastest since May 2009.

“New cycles also bring new leadership and after the longest emerging-market equity bear market on record, we see a strong price recovery over 2023 in our base case,” the strategists wrote.

The main index for local currencies is 3.1% higher, also the best since March 2016. It’s trading above its 100-day moving average for the first time since April in a sign that investors are overcoming the jitters over Russia’s war in Ukraine. South Africa’s rand, a proxy for the emerging-market outlook, has posted the world’s best performance against the dollar.

Many emerging nations, from Brazil to Hungary, raised their interest rates proactively as a hawkish Fed threatened their currencies. The cumulative impact of the hikes boosted real yields far above developed-nation levels. With signs of moderating inflation, that provided just the spur for carry traders to resume their emerging-market exposure. They made an annualized 34% return in November. They have made better returns on only six occasions in the past decade.

In a year of record losses for both dollar-denominated and local-currency bonds, November came as a fresh breath of air. The bonds not only rallied, but they outperformed US debt in a sign that global investors are once again eager to hunt for higher yields. Bloomberg’s gauge of local-currency sovereign bonds climbed the fastest since 2016, while that of dollar-based securities surged the most since 2008.

As a result, the extra yield investors demand to own emerging-market sovereign dollar bonds rather than Treasuries narrowed 70 basis points, reaching the lowest level since June.

“This is a result of the downside surprise to the US inflation print, potential peace talks between Russia and Ukraine and cleaner technicals,” said Uday Patnaik, the head of emerging-market fixed income at Legal & General Investment Management Ltd. “There is also hope for a gradual reduction in China’s Zero Covid policy. From an economic standpoint, EM is forecast to outperform DM fairly significantly in 2023.”

--With assistance from Colleen Goko.