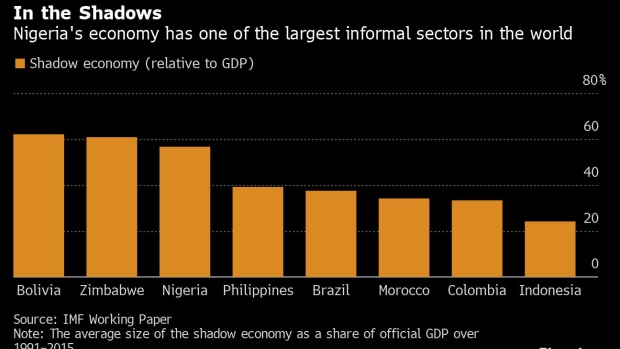 Shoppers walk through a plaza in Lagos, Nigeria, on Monday, March 29, 2021. Nigerians are having to contend with the highest inflation rate in four years, the second-highest unemployment rate on a list of 82 countries tracked by Bloomberg, and an economy that’s only just emerged from recession. Photographer: Adetona Omokanye/Bloomberg , Bloomberg

Alerzo, a two-year startup offering e-commerce and payment solutions to Nigerian retailers, says its valuation is already in the hundreds of millions of dollars as it prepares for a funding spree to dramatically expand across Africa’s most populous nation.

Fresh off a financing round that included billionaire Michael Novogratz’s family office, the firm is soon planning to raise between $50 million and $100 million, Adewala Opaleye, Alerzo’s founder and chief executive officer, said in a virtual interview. The company has raised $20 million so far.

“We have started talking to people,” Opaleye, 27, said from Ibadan in southwest Nigeria, where the firm is headquartered alongside Singapore. “Possibly it could be this year or next.”

The goal is to extend services to more than half of Nigeria’s 36 states -- from about five currently -- by next year. Opaleye said the company will probably reach a coveted unicorn valuation of at least $1 billion “faster” than expected.

Nigeria and its huge informal economy have been Africa’s breeding ground for tech unicorns as companies catering to a large unbanked population revolutionize the way people transfer money and pay for goods and services.

OPay and Andela are among firms that needed only a few years to cross the valuation threshold. Payments firm Flutterwave Inc. is already seeking fresh funding at a valuation of $3 billion or more, roughly triple what it achieved just months ago, people with knowledge of the matter said this month.

Nigeria, a nation of about 200 million where over a third of all adults lack access to banking services, is appealing to startups promoting financial inclusion and ease of payments. The government is meanwhile increasing spending on tech infrastructure to boost innovation, create jobs and revive growth.

The company services clients in the nation’s smaller cities and towns, where poor state of roads and lack of supply-chain infrastructure may hurt Alerzo’s ability to ramp up business.

Alerzo is providing goods delivery services, cashless payments and mobile airtime top-up to more than 150,000 informal mom-and-pop stores in Nigeria and processing more than 400,000 transactions per month. Its annualized transaction value for September exceeded $155 million, according to an emailed statement.

“Instead of retailers walking around a central market to buy products, they just sit in their shops and order products via phone calls, text messages and right now a mobile app,” Opaleye said.

A physics graduate who also studied computer science in China, Opaleye says he started Alerzo to help his mother, a single parent who ran two informal retail stores in Ibadan to support him and three siblings. The vast majority of the company’s retail customers are women.

“Women are often victims of theft because street boys know retail store operators often carry cash,” Opaleye said. “I wanted to apply what I learned in China to make life better for working mothers in Nigeria.”Alerzo sources products from manufacturers and delivers them to retailers, adding to its income from transactions on the digital platform. It acquired Shago Payments, another local fintech, in the third quarter to strengthen its digital offerings.

The firm projects the number of its customers could triple by next year from 150,000, according to the CEO.

“Our goal is to empower a broad community of retailers across the country, especially those that are underserved and unbanked,” he said.