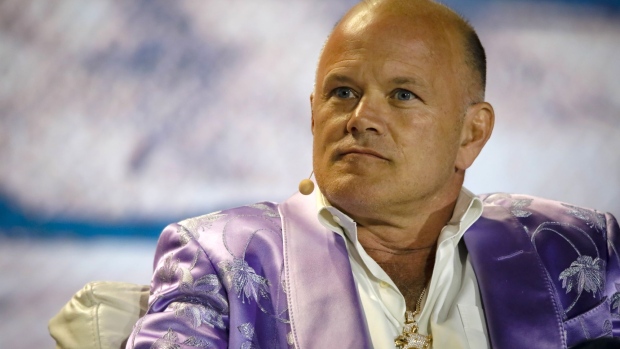 (Bloomberg) -- Galaxy Digital Holdings Ltd. is anticipating a loss of $300 million in net comprehensive income this quarter, as uncertainty swirls across the broader cryptosphere.

The crypto merchant bank revealed the potential hit in a preliminary update released Friday “in light of recent market conditions.” Comprehensive income typically combines both a company’s net income as well as any yet-to-be realized financial gains or losses.

The $300 million dampener would bring “partners’ capital” -- or total equity -- to $2.2 billion, a decline of 12% versus March 31, 2022, according to the statement. New York-based Galaxy Digital declined a request for comment.

The news comes in the midst of a crypto market crash, fueled by the unraveling of algorithmic stablecoin TerraUSD and its sister coin, Luna. The recent depegging of TerraUSD from the dollar accelerated a sell-off of Bitcoin and other cryptocurrencies, wiping out about $270 billion of cryptoasset market value.

However, Galaxy Digital said that its treasury “does not utilize algorithmic stablecoins” in its May 13 update, adding that it remains “in a strong capital and liquidity position.” The company’s liquidity stands at about $1.6 billion, including $800 million in cash and over $800 million in net digital assets.

“Any concerns that GLXY would be subject to a sizeable loss due to exposure to LUNA tokens are clearly unwarranted,” BTIG analysts Mark Palmer and Andrew Harte wrote in a note Friday, citing a disclosure from Galaxy that it sold significant amounts of LUNA in the first quarter, as well as average collateralization levels “well over 100%” at Galaxy Digital Trading, and smooth operation and execution of the platform amid recent market volatility.

The BTIG analysts also said that their estimates for Galaxy, which they rated Buy with a price target of C$37 ($28.50), are under review.

The company logged a net loss of about $112 million in the first quarter against a backdrop of large digital asset price declines. Partners’ capital stood at $2.5 billion by the end of March, split between $850 million in cash, $440 million in stablecoins and $400 million in liquid net digital assets, according to Alex Ioffe, the company’s CFO, on a May 9 earnings call.