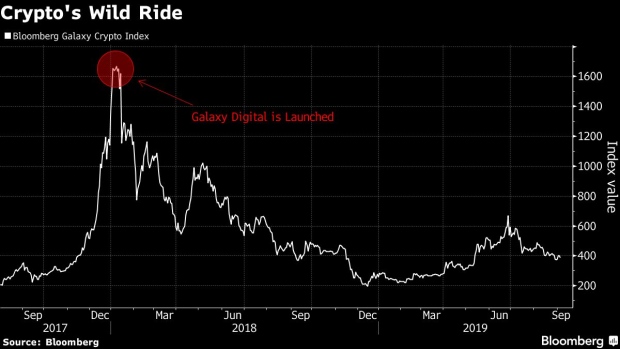 (Bloomberg) -- Michael Novogratz is a step closer toward his vision of making Galaxy Digital Holdings Ltd. the Goldman Sachs of cryptocurrencies.

“It’s a really young industry, and we are a pretty young business,” Novogratz said in a phone interview. “We are sober and patient about how fast it will grow, and we are well capitalized. This feels like a perfect addition.”

Galaxy already invests in start-ups and coins, and helps companies secure funding for everything from early- to later-stage rounds. Galaxy managed $390 million in assets as of July 31.

Novogratz, 54, is a former Goldman Sachs Group Inc. partner who spent more than a decade at the New York-based bank. He later became a principal at Fortress Investment Group LLC and managed the Fortress Macro Fund before it was liquidated in 2015. He launched Galaxy in January 2018 during the height of the crypto bubble.

The company’s advisory business is headed by Ian Taylor, who worked at Goldman Sachs for 18 years before joining Galaxy in December. The Australia native is now leading a team of eight -- up from three employees in December -- with backgrounds in investment banking, consulting and structured finance.

Business could take several years to ramp up, but there are plenty of hopeful signs that IPO demand could be coming: A number of crypto exchanges like Coinbase Inc. have raised money at valuations in the billions, and companies like mining hardware giant Bitmain Technologies Ltd. are already planning IPOs. Many major exchanges, mining and chip businesses are generating real revenue and profits.

“The business that we are building on the advisory side is a long-term, relationship-based business,” Taylor said. “In time that will pay dividends as financing and strategic advisory opportunities arise.”

Galaxy is already working on finding financing for a Bitcoin mining data center to be located in the U.S., for example, Taylor said.

Mergers-and-acquisitions advising could be poised to take off as well. Traditional companies like card network Mastercard Inc. and PayPal Holdings Inc. have joined the Libra Association, a Facebook Inc.-led effort to issue a new digital coin for payments -- and such companies may look to acquire crypto businesses at some point as well. Due to political and regulatory scrutiny, Novogratz pegs Libra’s chances of launching next year at 50%.

Eventually, Galaxy also wants to issue tokens that could connect to or represent ownership of many valuable objects and revenue streams, Novogratz said.

“The key here is regulators have been a little slower than we want them to be, but I think they are heading in the right direction,” Novogratz said. “There are a lot of interesting projects, but nothing has happened yet on the ’tokenization of everything’ front.”

While some traditional investment banks could join the fray by that time, Novogratz hopes to enjoy a first-mover advantage -- and an advantage of someone focused on crypto from day one.

“The traditional banks don’t have the DNA that they really need to understand the crypto community yet,” Novogratz said. “Our edge over time is that we are going to see more projects and get an understanding of what works and what doesn’t.”

--With assistance from Ben Bain.