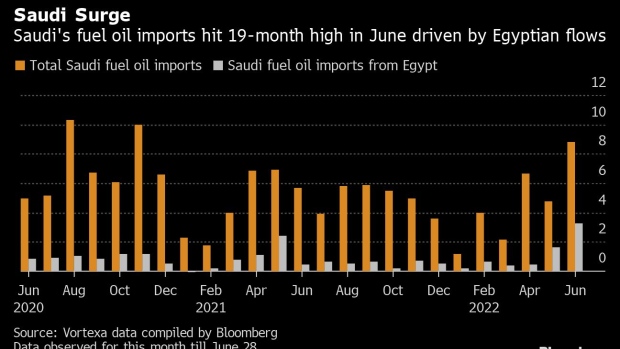 This month, the kingdom will take 3.2 million barrels of the power-station fuel from the northeast African country, the highest in at least six years, according to Vortexa Ltd. data compiled by Bloomberg. For its part, Egypt’s own imports of the product from Russia are set to soar to 1.8 million barrels, the most since at least 2016.

The sudden surge in Egyptian inflows and outflows bears the hallmarks of at least some Russian-origin fuel going to Saudi Arabia. It follows a similar hike in deliveries to the world’s largest crude exporter from Estonia, a nation that has no oil refinery.

“It appears that increasing volumes of Russian fuel oil are making their way to Saudi Arabia via Egypt,” said Jonathan Leitch, an oil market analyst at Turner, Mason & Co.

The Russian cargoes are heading to the Egyptian Red Sea terminal of Ain Sukhna, where Aramco Trading Co. has storage. From there, the fuel oil is being shipped across the sea to multiple ports in western Saudi Arabia.

Overall deliveries to the kingdom of the power-generation and shipping fuel are expected to climb to about 9 million barrels in June, the highest since November 2020, according to industry and Vortexa data compiled by Bloomberg. That means Egypt accounts for more than a third of them.

Demand for fuel oil soars in the Middle East summer as some of the hottest weather on Earth lifts power generation for air conditioning. Saudi Arabia’s imports gained by 86% month-on-month in June, making it the third biggest buyer of fuel oil this month, behind Singapore and the US.

“Saudi Arabia has indeed been ramping up imports of Russian fuel oils as there are no sanctions preventing this from happening,” said Peter La Cour an oil-products analyst at Energy Aspects Ltd. “Russian fuel oil is the cheapest barrel available to fuel Saudi summer power generation demand and makes economic sense.”

Most but not all of what’s passing through Egypt to Saudi Arabia will be from Russia, he said, adding that Egypt exported to Saudi before the invasion, and the two countries had various supply deals in place.

For its part, Russia needs to find buyers for those crude and refined products shunned by the US and several European countries following President Vladamir Putin’s invasion of Ukraine in late February.

“The most likely place this high sulfur fuel oil is coming from is indeed Russia,” said Andon Pavlov, lead analyst for dirty products and refining at data analytics firm Kpler.