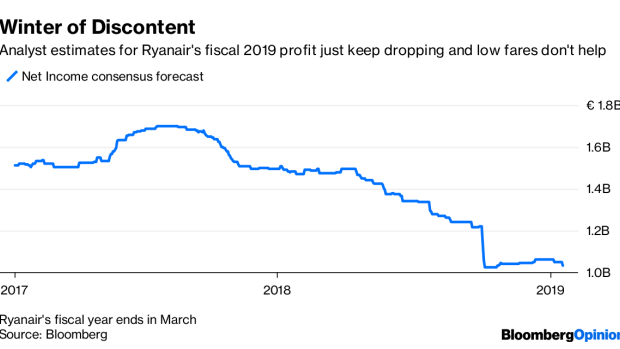 (Bloomberg Opinion) -- Back at your desk for barely a fortnight and already dreaming of another winter break? Now’s a great time to book flights (and there’s no shortage of snow in the Alps). On Friday, the once impregnable Ryanair Holdings Plc served up its second profit warning in barely three months, blaming overcapacity on short-haul European routes for putting downward pressure on fares.

That’s wonderful for holidaymakers, but grim for investors. Anecdotal evidence (albeit from another airline): I was recently quoted a bargain 100 euros ($114) for a return flight from Berlin to Salzburg departing in about a month’s time. I was planning to drive; now I probably won’t.

As ever, the cantankerous budget carrier attempted to put a positive spin on its roughly 9 percent cut to full year profit guidance, suggesting that low fares are hurting everyone and that weaker rivals will go bust. Chief executive Michael O’Leary has a point. Flybe Group Plc was bailed out by a consortium led by Richard Branson’s Virgin Atlantic Airways Ltd just last week, while cash-strapped Norwegian Air Shuttle ASA is cutting routes.

But if O’Leary hoped to divert attention from his own problems, he failed. The shares fell to a three-year low, bringing the decline since a 2017 peak to almost 50 percent. That’s about 12 billion euros of destroyed value.

Analysts were anticipating bad news, but they were given something more to worry about as Ryanair didn’t rule out a third profit warning before its financial year concludes in March. Further fare cuts, plus Brexit turbulence are a risk. It doesn’t sound like Ryanair is a master of its own destiny. Indeed, it hasn’t since the airline agreed to recognize trade unions around a year ago. It’s harder to compensate for falling ticket prices by slashing costs when you have to negotiate pay deals.

In theory, the low fare environment shouldn’t be too damaging for Ryanair, whose cost base is still proportionally smaller than that of rivals. The 30 percent slump in oil prices since the summer should help too. As will the boosting of so-called ancillary sales – things like priority boarding and food and drink.

In reality, though, when air fares plunge nobody makes much money, and the bankruptcy of several airlines hasn’t taken much capacity out of the market. Stronger airlines have rushed to swallow their weaker rivals and grab their prized takeoff slots.

With the shares trading on about 9.5 times the revised profit forecast, Ryanair certainly isn’t expensive (much like its air fares). But absent near-term earnings growth, O’Leary isn’t doing much to attract shareholders. Bargain-hunting holidaymakers, on the other hand, will be checking the snow reports.