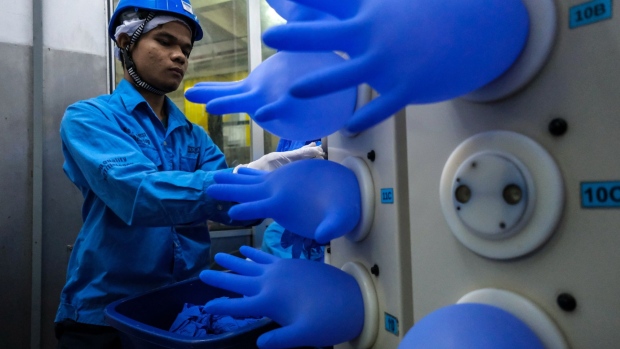 Employees attach latex gloves to an air compressor as other gloves are inflated in the air-leak test room at a Top Glove Corp. factory in Setia Alam, Selangor, Malaysia, on Tuesday, Feb. 18, 2020. The world’s biggest glovemaker got a vote of confidence from investors in the credit market, as the coronavirus fuels demand for the Malaysian company’s rubber products. The World Health Organization is taking an unprecedented step of negotiating directly with suppliers to improve access to gloves, face masks and other forms of protective equipment. Photographer: Samsul Said/Bloomberg , Bloomberg

(Bloomberg) -- An impending glove shortage is hitting the world, compounded by measures to contain the deadly coronavirus in a country that dominates production: Malaysia.

The country’s glovemaking association -- whose members make 3 out of every 5 gloves worldwide -- is warning of a global “chronic shortage” of the critical medical gear as the plants were forced to cut staffing due to Malaysia’s expansive lockdown. Top Glove Corp. Bhd, the world’s largest producer, said demand from the U.S., Europe and other nations outstrips its capacity while fulfillment of orders is running as late as four months behind.

Malaysia has restricted movement across the country and ordered many businesses to shut while requiring others to keep as many workers home as possible to curb the spread of the pathogen. Most glovemakers have received an exemption to staff their factories at just 50%, with some of the companies planning to meet with a top trade ministry official on Thursday to seek approval to operate with a full workforce, according to the Malaysian Rubber Glove Manufacturers Association.

Governments across the world are desperately trying to acquire and stockpile critical medical supplies such as masks, ventilators and gowns as frontline doctors and nurses face shortages. That’s forcing many of the biggest makers to run factories around the clock to meet demand. Malaysia’s glovemakers, however, are having to curb output as the country fights a second wave of coronavirus infections.

“Today’s demand is abnormal. Hospitals are running out of gloves,” said Denis Low, president of the glovemakers’ association in a phone interview Thursday. “We are not able to supply the quantity that we want. It’s not our choice.”

Low said association members will meet with Azmin Ali, the senior minister for trade and industry, on Thursday to request the additional exemption. Malaysia’s industry supplies about 67% of the global demand for as much as 345 billion units annually, he said. It’s also being asked to meet local need for gloves first, before the rest of the world.

Even at full capacity, Malaysia’s producers won’t be able to meet the current need. Top Glove said it’s seeing orders for as many as 2.6 billion gloves weekly -- double its full capacity. The company, which supplies a little more than a quarter of the world’s gloves, recently received an exemption to fully staff its production lines.