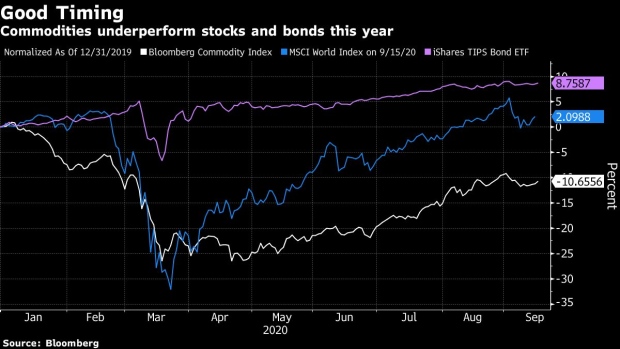 “From an inflation point of view, as an investor, I think investing in material sectors while they’re under-appreciated is not a bad thing now,” Blankfein said at the CME Group Inc.’s virtual metals briefing. “Everyone has decided that we’ll never have inflationary pressure again, oil prices will never go up again. I don’t think so.”

The Bloomberg Commodity Index is down almost 11% this year, compared with a 2.1% return for the MSCI World Index and 8.8% for iShares TIPS bond ETF.

Blankfein’s comments echoed value investor Kopernik Global Investors LLC, which has has about $3.3 billion in asset under management. Its Kopernik Global All-Cap Fund is up about 23% this year, beating 97% of its peers, according to data compiled by Bloomberg.

Kopernik’s director of research, Alissa Corcoran, said that even though some short-term events such as demand destruction due to Covid-19 haven’t been positive, some commodities would likely see higher prices in the longer-term due to better supply-demand fundamentals.

Blankfein, who joined Goldman as a metals salesman in 1982, wasn’t as optimistic about precious metals, however. He said he’s unclear if it’s a good idea to invest in gold and silver “because it’s been so long since those metals played a role as a store of value.”

Gold jumped to a record in early August and has soared almost 30% in 2020, as the coronavirus pandemic sparked a surge in demand for haven assets. Unprecedented economic stimulus from governments and central banks worldwide has also raised the specter of inflation, adding to the appeal of bullion.