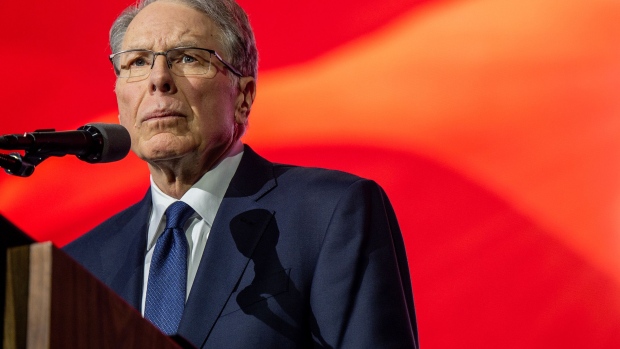 (Bloomberg) -- National Rifle Association leader Wayne LaPierre avoided a no-confidence vote that would have ousted him from the post he’s held for more than 30 years, just days after a school massacre recharged the debate over US gun laws.

The proposed vote didn’t concern the shooting, but was drafted by NRA dissidents unhappy with LaPierre’s leadership, which has come under withering internal criticism in recent years. The motion’s author, Robert Ryan of Arkansas, accused LaPierre of “cowardice” for failing to carry a firearm for personal protection.

“In the last few years you have brought questioning and shame down on this organization,” Ryan said in an apparent reference to 2019 reports of lavish spending by LaPierre and others that triggered the removal of former President Oliver North and a top lobbyist.

The no-confidence vote, at the group’s raucous weekend meeting in Houston, was declared out of order under parliamentary rules.

But the unusually open challenge came at a time when the NRA is struggling with declining membership, financial strain and a widening cultural chasm over the seeming ubiquity of firearms in American life. For many dissidents, LaPierre is both too tainted and not tough enough to face that challenge to the gun-rights movement.

“I am speaking here because of the enemy within,” said Janet Nyce, co-chair of the association’s Women’s Leadership Forum. “I’m talking about this narcissistic gaslighting by a small group of people that have taken our NRA down to her knees.”

Jay Price, a retired sheriff from Montana, said “there’s not a man alive who’s done more for the Second Amendment than Wayne LaPierre.”

The annual meeting, which was the NRA’s first since the global pandemic emerged in early 2020, kicked off three days after a lone gunman slaughtered 19 schoolchildren and two teachers in Uvalde, Texas. The massacre, which prompted some politicians and entertainers to cancel plans to appear at the NRA event, was rarely mentioned during Saturday’s proceedings.

After an opening prayer and pledge of allegiance to the US flag, NRA President Charles Cotton requested a moment of silence to remember soldiers who died in wars, slain law enforcement officers and the victims in Uvalde.

Herbert Louis, who was presented with a plaque for being the oldest member present, predicted gun-control efforts will intensify. The 96 year old urged his fellows to resist.

“It sounds to me like the Democrats want to take guns away from us because we’ll be the ones to rise up when they take over the county and it’s a damn dictatorship,” Louis said to loud applause.