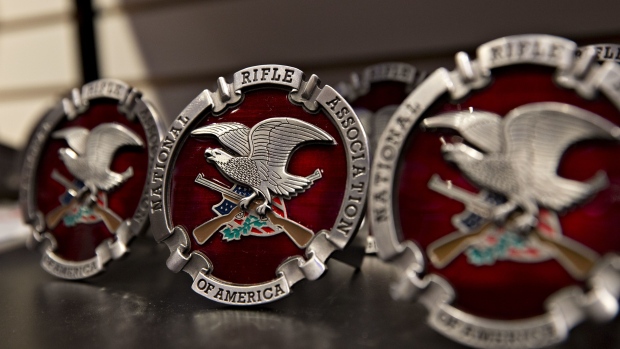 Sylvester Turner, mayor of Houston, speaks during the 2019 CERAWeek by IHS Markit conference in Houston, Texas, U.S., on Friday, March 15, 2019. The program provides comprehensive insight into the global and regional energy future by addressing key issues from markets and geopolitics to technology, project costs, energy and the environment, finance, operational excellence and cyber risks. , Bloomberg

(Bloomberg) -- The National Rifle Association’s annual meeting kicks off in Houston days after a mass school shooting with speakers dropping out, pressure from the mayor to cancel and protests planned outside the convention center.

Texas Governor Greg Abbott, who was slated to speak in person Friday afternoon before former President Donald Trump, will instead be some five hours away in Uvalde, where 19 students and two teachers were killed Tuesday in a massacre that has renewed anger over Washington’s paralysis on gun control.

Houston Mayor Sylvester Turner rebuffed calls to cancel the convention because of concerns the city would face lawsuits, but he had urged the NRA to postpone it out of respect for victims. The four-day event, planned for more than two years and billed as the “largest gathering of NRA members and Second Amendment supporters in the country,” is expected to draw 80,000 attendees.

Gun control groups have planned protests outside the George R. Brown Convention Center -- and the police said they are boosting security to the point of “near full mobilization.” Turner urged protesters to demonstrate peacefully, keeping the focus on the victims of the shooting.

So far, Moms Demand Action, Indivisible Houston and the Houston chapter of Black Lives Matter are organizing activities at the convention center and nearby Discovery Green, a prominent park that hosted numerous demonstrations in recent years.

Downtown streets around the convention center were ringed by heavy-steel fencing that restricted foot and vehicle traffic. On Thursday afternoon, horse-mounted police patrols were stationed at crosswalks dotted with visiting NRA members and vendors heading to the venue to collect entrance badges.

Some 8,000 protesters showed up to the NRA convention in Denver after the Columbine High School shooting in 1999.

Trump announced on Wednesday after the mass shooting that he would keep his commitment to speak at the convention because “America needs real solutions and real leadership in this moment, not politicians and partisanship.”

Meanwhile, Daniel Defense, the maker of the gun used in the massacre, has dropped out of a planned appearance at the NRA convention. “We believe this week is not the appropriate time to be promoting our products in Texas at the NRA meeting,” the company said in a statement, according to CNN.

Several of the musicians who had been slated to perform at the convention also have canceled since the shooting. Don McLean, the writer and singer of “American Pie,” along with musicians Lee Greenwood, Larry Gatlin and Danielle Peck are among those who have canceled, according to the Dallas Morning News.

The NRA posted on its website that because the US Secret Service is handling security around Trump, guns, firearm accessories and knives won’t be permitted in the hall when he’s speaking.

The NRA has been a major supporter of Trump. The group was the largest financial backer of his 2016 campaign, spending $31 million to help elect him. It spent $16.6 million on his re-election campaign in 2020, according to OpenSecrets.

Trump, who spoke at the last NRA convention in 2019 -- the 2000 and 2021 meetings weren’t held because of the pandemic -- has been a vocal supporter of gun rights and often mentions in his endorsements of candidates that they are strong supporters of the Second Amendment.

In Congress, Senate Democrats continue to pursue a compromise with Republicans on gun-safety legislation in the wake of the shooting, including a bipartisan proposal that would encourage states to set up “red-flag” laws allowing courts to take weapons from people seen at risk of committing violent acts. There is an effort to tighten background checks as well. But there’s little chance of any of the sweeping measures that Democrats have supported in the past approach getting through Congress.

Most Republicans oppose any measure curtailing access to firearms, and it would take at least 10 GOP lawmakers to agree to legislation to overcome any filibuster in the 50-50 Senate. Congress has left Washington for its holiday recess, but senators plan to continue negotiations by phone on a range of proposals, most of which are narrowly tailored to draw Republican support.

President Joe Biden plans to visit Uvalde on Sunday to meet with grieving families and community members. Earlier this week, he decried the deaths as senseless and demanded lawmakers confront what he called “powerful lobbies” that have thwarted gun-control legislation for decades.

“The National Rifle Association has proven time and time again that they are contributing to the problem of gun violence, not trying to solve it,” White House press secretary Karine Jean-Pierre told reporters Thursday. “It’s shameful that the NRA and their allies have stood in the way of every attempt to advance measures that we all know will save lives from gun violence.”