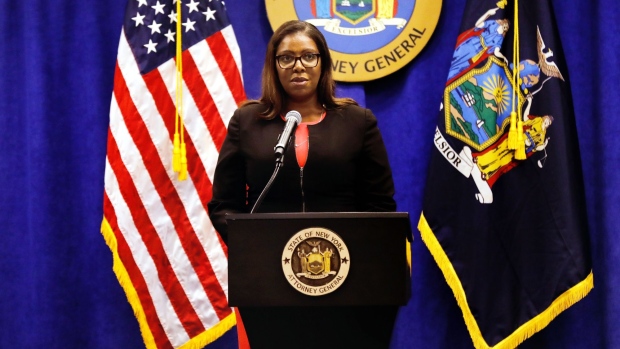 (Bloomberg) -- The National Rifle Assocation took what might have been the biggest legal gamble of its life and lost. Now, it faces a potential outcome that progressive U.S. politicians have long desired -- a complete dismantling of the most powerful gun lobby.

A Texas judge on Tuesday rejected the NRA’s attempt to file for bankruptcy, clearing the way for a fraud lawsuit filed by New York Attorney General Letitia James to proceed. James has made no secret of her wish to dissolve the nonprofit organization, last year calling it “fraught with fraud and abuse.” But a New York judge will have to decide whether her case has merit.

It’s a stunning turn of events for the organization, which has gone through many personality changes during its 150 years. Founded after the Civil War by former Union Army officers appalled at their soldiers’ marksmanship, it evolved into an organization beloved by hunters and sport shooters. Wayne LaPierre took over as its leader in 1991 and fostered a burgeoning membership in sync with the Republican Party.

The dismissal of the bankruptcy case renews focus on the state’s lawsuit, which if successful could slash the NRA’s political clout, scare off much-needed donors and force the organization to shake up its management, said Eric Chaffee, a professor at University of Toledo College of Law in Ohio who has advised charities.

“We might ultimately see a National Rifle Association that is a very different entity than the one that currently exists,” Chaffee said. “It may not be as strong as it historically has been in terms of being the juggernaut for pursuit of gun rights.”

A trial in New York is tentatively set for next year. The case isn’t about gun rights, but claims that the NRA ripped off its members by squandering donated cash on luxury expenses.

The NRA said in a written statement that it remains determined to confront James. It also noted that it can still pursue establishing business operations in Texas, and the organization will continue to explore moving its headquarters there from Virginia. Texas is home to more than 400,000 NRA members.

“We remain an independent organization that can chart its own course, even as we remain in New York to confront our adversaries,” LaPierre said in the statement. “The NRA will keep fighting, as we’ve done for 150 years.”

The NRA’s political clout peaked in 2016, when it spent $54.4 million on federal elections, including $31.2 million backing Donald Trump for president, according to the Center for Responsive Politics. Its spending fell to $29.4 million in 2020. Just 18% of its outlays went to winners last year, compared to 94% in 2016. Membership has remained fairly steady over the past few years, and is currently around 4.9 million.

For years the group has received millions of dollars annually from its charitable arm, the NRA Foundation, whose donors get a tax deduction. The Covid-19 pandemic disrupted the grassroots fundraising events the foundation relied on. But even before the pandemic, the NRA’s fundraising had dropped. It raised $291 million in 2019 according to its federal tax return, the most recent year available, a 17% decrease from a year earlier.

Almost three years ago, the organization warned in a separate lawsuit that it was under financial stress because of efforts made by New York to limit insurance policy protections. In response, New York Governor Andrew Cuomo jokingly sent “thoughts and prayers” to the group, a common refrain issued by many conservative political figures after mass shootings.

When it announced the bankruptcy filing in January, the NRA said in a letter on its website that it was “DUMPING” its New York home and seeking to reincorporate in gun-friendly Texas. In rejecting the filing, Judge Harlin Hale in Dallas said the group was “using this bankruptcy case to address a regulatory enforcement problem, not a financial one.”

The NRA could try and file for bankruptcy again with the same judge in Dallas. But Hale warned that his concerns about the NRA’s management might prompt him to remove LaPierre and appoint a trustee to run the organization.

Testimony in the case was vivid. Among the revelations: LaPierre acknowledged he failed to disclose free yacht trips from a vendor and said he and a few close associates kept the NRA’s own board, chief financial officer and general counsel in the dark about the January bankruptcy filing until it had been made.

“Excluding so many people from the process of deciding to file for bankruptcy, including the vast majority of the board of directors, the chief financial officer, and the general counsel, is nothing less than shocking,” the judge wrote in his ruling.

Those revelations are bound to shake up the top management at the NRA, said Robbin Itkin, a partner at Sklar Kirsh LLP, who wasn’t involved in the case.

“Given the broad publicity, and specifically what appears to be total disregard for corporate governance in filing for bankruptcy, including not giving notice to its own board of directors, all this is going to come back to haunt current management and the organization,” she said.

But he noted that James faces a high bar in her attempt to dissolve the NRA. “New York law does not allow the NYAG to summarily dissolve a charity,” he said. Instead, “the Attorney General must show a regulated entity’s misconduct ‘has produced, or tends to produce, injury to the public. The transgression must not be merely formal or incidental, but material and serious, and such as to harm or menace the public welfare.’”

James, a Democrat who was the first Black woman to win statewide office in New York, has shown she’s not afraid to take on big cases, filing suit against Facebook Inc. and Google, and leading an investigation into the state’s governor.

In February, the NRA hit James with a series of counterclaims, accusing her of targeting the organization to further her political career. The state had never before sought to dissolve a nonprofit based on allegations of self-dealing, the NRA argued.

“The difference here is James’s well-documented animus against the NRA,” the organization said in the filing. “James’s radical departure from precedent to pursue dissolution cannot therefore be reasonably viewed as anything other than abuse of the non-profit laws to silence a political enemy.”

In a call with reporters Tuesday, James rejected what she called NRA “mud slinging” and said her lawsuit is justified.

Kris Brown, president of Brady, a nonprofit that seeks to prevent gun violence, called the judge’s decision “a historic win for the rule of law and a sure sign of defeat for the NRA and its corrupt leadership.”

Brown said the decision was correct and the Brady organization reiterated its support for James.“The time is right to dissolve today’s corrupt version of the NRA, which has strayed hopelessly away from its roots focused on gun safety.”

(Michael R. Bloomberg, founder of Bloomberg News parent Bloomberg LP, is a donor to candidates and groups that support gun control, including Everytown for Gun Safety.)