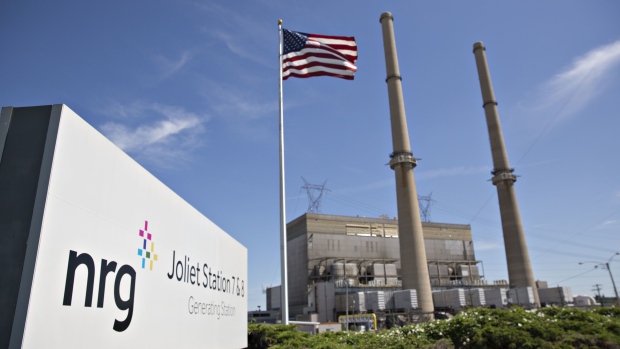 An American flag flies outside the NRG Energy Inc. Joliet Generating Station in Joliet, Illinois, U.S., on Wednesday, July 26, 2017. Coal-fired power plants employ more people than mines, and they're shutting down all over the country. Cheap natural gas, the rise of renewables backed by tax credits, and subsidies for nuclear energy will likely combine to keep the trend going and leave more people out of work. , Bloomberg

(Bloomberg) -- NRG Energy Inc.’s $2.8 billion takeover of Vivint Smart Home Inc. underscores just how keen one of the largest US power generators is to glean business from inside American homes.

The Houston-based company will go deeper into households by offering Internet-driven technologies for thermostats, locks, lighting and other devices, moving beyond its traditional business of supplying electricity. The deal marks another example of how home automation and electrification are upending the power industry.

Managing residential power usage will be critical to keep US grids stable when demand is set to spike with greater adoption of electric vehicles amid a broader transition away from fossil fuels. Deploying technology within homes could help neighborhoods pool excess power to reduce stress on the grid and reward households with payouts. EV automaker Tesla Inc., for instance, has been pushing to tap rooftop solar systems and batteries to create such “virtual” power plants in Texas.

NRG made a pivot into the residential market last year after buying retail power giant Direct Energy LP for $3.6 billion. Home automation is the next step and represents a $165 billion industry with an even faster growth rate than the typical retail market, NRG Chief Executive Officer Mauricio Gutierrez said in a Tuesday analyst call on the deal. The Vivint takeover will add 1.9 million customers to NRG’s existing 5.5 million retail clients.