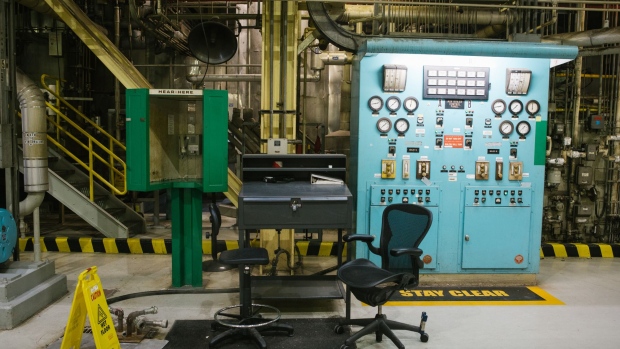 A lower level turbine room is seen at the Exelon Corp. Three Mile Island nuclear power plant in Middletown, Pennsylvania, U.S., on Wednesday, April 11, 2018. On Sept. 30, Exelon Corp. plans to take Three Mile Island offline because it is no longer profitable. Across the U.S., Nuclear plants are having trouble staying competitive in an era of cheap natural gas, a product of the shale boom. Photographer: Michelle Gustafson/Bloomberg , Bloomberg

(Bloomberg) -- Struggling nuclear power reactors could be given a $6 billion lifeline in the bipartisan infrastructure bill being written in the U.S. Senate, according to a draft obtained by Bloomberg News.

A program to evaluate nuclear reactors that are in jeopardy of closing and provide them with aid would be created within the Energy Department under terms of the $550 billion, bipartisan infrastructure package. The text of the infrastructure bill hasn’t been released and changes could still be made before its release.

The move comes as the White House and as the nuclear power industry, which provides about 19% of the nation’s electricity, has been beset by a wave of reactor closings as it struggles to compete with cheaper electricity produced using natural gas, and, increasingly, renewables.

The nuclear program could be a boon for operators such as Southern Co. and Exelon Corp., as well as for uranium miners like Lakewood, Colorado-based Energy Fuels, Inc. Nuclear reactors that use domestically mined and enriched uranium would be given priority under the proposed program, according to the bill text.