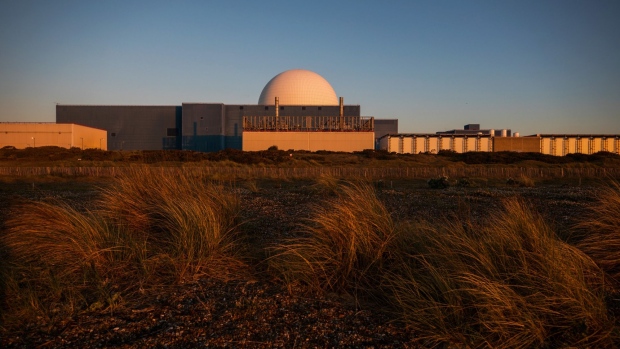 The Sizewell B nuclear power station, operated by Electricite de France SA (EDF), stands in Sizewell, U.K., on Friday, May 15, 2020. The network operator struck a deal with EDF to cut supply at its Sizewell nuclear plant by half for at least six weeks because the demand for power is 20% lower than normal as measures to contain the coronavirus have shut industry and kept people at home for weeks. Photographer: Chris Ratcliffe/Bloomberg , Bloomberg

(Bloomberg) -- As much as one-third of the U.K.’s emissions-free hydrogen requirements could be produced by nuclear power by 2050, according to the Nuclear Industry Council.

Its hydrogen roadmap outlines using large-scale and small modular reactors to produce so-called green hydrogen through electrolysis. The analysis estimates that 12 to 13 gigawatts of nuclear capacity would be able to produce 75 terawatt-hours of hydrogen or a third of what’s needed by 2050.

“Green hydrogen from nuclear is not a distant dream but could happen now,” Julia Pyke, director of financing for Sizewell C said. “In the longer term, Sizewell C could produce large amounts of green hydrogen and bring added flexibility to the energy system.”

The U.K.’s Climate Change Committee estimates the country will need as much as 225 terawatt-hours of hydrogen per year to reach its net zero target but it needs to be done using clean sources of energy. Currently the most common method of hydrogen production, steam methane reformation, emits 10 kilograms of carbon dioxide for every kilogram of hydrogen.

Cost is seen as the main obstacle to green hydrogen, with ambitious carbon pricing as a key tool to making production more competitive, according to the report.

The U.K. has set a target to develop 5 gigawatts of electrolyzer capacity by 2030, but a wide-scale roll out is expected to be 10 years away.

Polluters in the U.K. currently pay a carbon levy as well as buying certificates to cover their emissions. Britain’s national carbon trading system is being rolled out post-Brexit with auctions due to begin by the end of June.