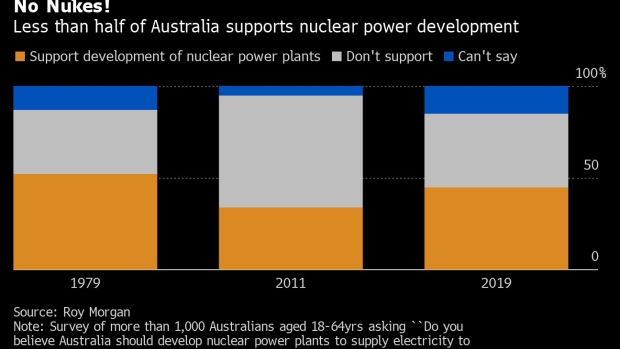 (Bloomberg) -- Australia’s surprise deal with the U.S. and Britain for nuclear-powered submarines has shaken its Asian neighbors and angered France. It’s also meeting resistance in the city chosen to build them.

The southern shipbuilding hub of Adelaide was thrown a lifeline five years ago when Australia reached a $36 billion deal with France to build diesel-powered submarines. Now hundreds of workers who were set to construct them are unsure about working with nuclear power and also apprehensive that they lack the skills needed to do the job.

Peter Bauer, a state secretary of the Australian Manufacturing Workers Union, said his organization has traditionally had a policy of opposing the nuclear industry. He was non-committal on whether workers would avoid the nuclear-powered submarines.

“There will be lots of people who would have concerns about a nuclear reactor, which is inside a submarine, being birthed at Port Adelaide,” he said by phone, adding that the group hasn’t done a formal survey yet.

“We are concerned about the uncertainty of what we are doing,” Bauer added. “There’s been no information given to us at all in relation to what sort of boat we’re building, what sort of involvement we’re going to have in the build.”

Prime Minister Scott Morrison has defended the deal as a “game changer” for Australian security in the face of China’s military assertiveness, saying it would add to Indo-Pacific stability. With an election looming, he’s betting that more Australians are worried about the threat from Beijing than concerns about the use of nuclear power -- a sentiment borne out in a poll this week.

Some 62% of Australians believed the government was correct to pursue the nuclear submarine deal, according to a Guardian Essential poll published on Tuesday, even as a majority said it would further inflame relations with China. Those surveyed backed the nuclear-powered submarines by a two-to-one margin, and gave Morrison’s coalition a double-digit advantage over the opposition Labor party when it comes to who voters trust more on national security.

“Many Australians view China as being aggressive, and they are increasingly anxious about a military conflict,” said Natasha Kassam, director of the Lowy Institute’s public opinion and foreign policy program and a former Australian diplomat in China. “Australia will be able to use this to justify for nuclear power. Australians are broadly supportive of defense spending.”

Morrison’s government has moved to shore up support in South Australia, where it holds four of the state’s 10 seats in the nation’s 151-member parliament. Still, every constituency is important: the ruling coalition’s majority is razor thin, and federal polls show the opposition Labor party ahead before an election expected in the first half of 2022.

Morrison said Adelaide will be the site for building at least eight submarines or some of their parts in a program that may take years or even a decade to complete. Over the next 18 months, his government plans to work out the details with its partners on specifications for the fleet.

Asked earlier this month whether the workers in Adelaide’s ship-building industry wouldn’t lose their jobs, Finance Minister Simon Birmingham said there was a “firm commitment” to help them transition into new roles. After the nuclear-submarine deal was announced, the government unveiled a A$6 billion ($4.4 billion) program to extend the life of its aging Collins Class submarines, with state-owned ASC Pty planning to hire workers from the French program.

“The important part there is the firm commitment we are giving in terms of supporting skilled workers, be they naval engineers, designers, shipbuilders, to be able to transfer across into the range of other programs that are being established,” Birmingham said, adding that he expects 5,000 South Australians to be employed in naval shipbuilding industries by 2030.

In making the announcement, Morrison was careful to say Australia wouldn’t seek to acquire nuclear weapons or establish a civil nuclear capability. Polls over the past decades have shown Australia remains reluctant to develop nuclear power.

The submarine deal has invigorated nuclear proponents who argue that atomic power is a solution to combating climate change as Australia faces pressure to speed up efforts to decarbonize an economy where coal-fired plants loom large. While nuclear power reactors are emissions free, they share similar problems as submarines: the massive capital costs, and the issue of safely disposing waste that can be politically dicey to deal with.

Just building nuclear submarines could prove to be a daunting task, given there’s strong demand for skilled workers globally. The U.K. needs about 20,000 workers in its own nuclear defense industry for at least the next decade, according to a government report.

While Australia won’t have nuclear weapons, it’s an indication of the number of workers Australia will need to successfully maintain a nuclear submarine fleet similar in size to that of the U.K., according to Edward Obbard, a nuclear materials engineer at the University of New South Wales who helps oversee Australia’s only masters-level nuclear engineering program. That group would include safety specialists who need upwards of 20-years experience.

To do that, he said, Australia needs to build a technical college and university programs to develop the workforce as these skills can’t be imported for sensitive projects. In France, about 1,400 students in nuclear energy science and engineering graduate yearly, more than half of whom are at the master’s degree level, according to the International Institute of Nuclear Energy.

Nuclear workers need specific career plans so the industry builds certain capabilities rather than be “open to some kind of free market forces,” Obbard said. “The old-fashioned state control and jobs for life -- I think it’s the only way to do it.”