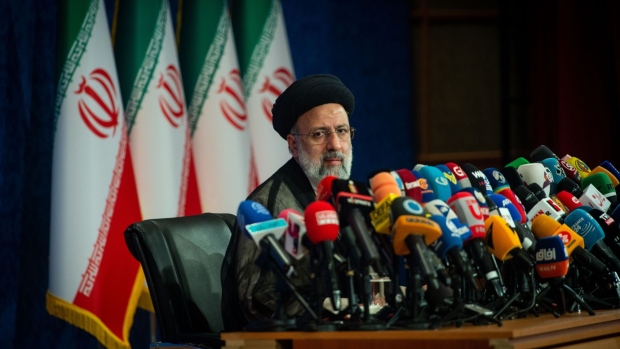 Ebrahim Raisi, Iran's president, holds his first news conference following his victory in the presidential election in Tehran, Iran, on Monday, June 21, 2021. World powers and Iran failed after a sixth round of negotiations in Vienna to revive a nuclear deal that would lift U.S. sanctions on the oil-rich Islamic Republic in exchange for it scaling back its atomic activities. Photographer: Ali Mohammadi/Bloomberg , Bloomberg

(Bloomberg) -- The climate has turned gloomy around world powers’ talks with Iran to revive a frayed nuclear accord, as a new ultraconservative Iranian president formally takes over Thursday and a crisis in Persian Gulf shipping lanes threatens to deepen.

Cleric Ebrahim Raisi will be installed after having received the blessing of his mentor, Supreme Leader Ayatollah Ali Khamenei, on Tuesday. Iran had put a brake on nearly three months of nuclear talks in Vienna to allow for its June presidential election and the changing of the guard, and hasn’t signaled when negotiations might resume.

The talks are intended to rein in Iran’s nuclear work in exchange for sanctions relief that would allow it to return to global oil markets. The delay has already put off Iran’s oil comeback beyond what many traders expected.

Negotiations once believed to recommence as early as mid-August could be pushed back to September or October, Russia’s ambassador to the International Atomic Energy Agency, Mikhail Ulyanov, said in an interview with Moscow’s Izvestia newspaper this week. The European Union’s deputy foreign policy chief, Enrique Mora, will attend Raisi’s installation in Tehran, and is expected to ask the new president when negotiations can resume.

U.S. and European officials have warned a prolonged delay could close the window on talks entirely. They’ll be watching for Raisi’s nominees for cabinet and his all-important negotiating team.

“We remain fully prepared to return to Vienna but this process cannot and will not go on indefinitely,” U.S. Secretary of State Antony Blinken said last week in Kuwait. As if to symbolize the frustration, police barricades around the hotels that had housed the American and Iranian negotiators during the talks were removed in late July.

Back-to-back attacks on Gulf shipping lanes over the past week -- including a deadly drone attack on an Israeli-managed tanker -- have ratcheted up tensions even further, with the U.S., U.K. and Israel all blaming Iran and vowing to respond. Tehran has denied involvement in either incident.

Although Raisi has said he intends to resume negotiations to save the agreement, which unraveled after Donald Trump withdrew the U.S. in 2018, his presidency marks the return of a hardline, staunchly anti-Western brand of politics to the executive branch of the Islamic Republic.

His mentor, Khamenei, has already signaled a harder stance in recent weeks. In their final meeting, Khamenei chastised Raisi’s predecessor Hassan Rouhani, who eagerly sought accommodation with the West, for adopting a failed strategy with the U.S. and Europe, and urged the next administration not to do the same.

Khamenei was especially opposed to the U.S. demand that Iran agree to future talks on matters like its ballistic missile systems in order to secure the revival of the nuclear agreement.

Iran expects sanctions to be verifiably removed before it even considers new commitments, said Kazem Gharibabadi, Tehran’s envoy to the IAEA and a negotiator, rebuffing the idea that his country was responsible for delaying talks.

Since the last round of talks broke down, Tehran has raced ahead with the production of highly enriched uranium close to the purity needed for weapons. In his final interview with state television on Monday, Rouhani warned Raisi that parliamentary legislation that allowed Iran to dramatically expand its nuclear activities this year will scuttle the accord’s revival.

“It’s not only dangerous because it brings Iran closer to a bomb,” said Laura Rockwood, the International Atomic Energy Agency’s former top lawyer, who participated in years of negotiations with Tehran’s government. “It’s also dangerous because it could make Iran less secure by making its neighbors even more nervous.” Tehran denies it wants to build bombs, but it was that prospect that sparked world powers’ search for a nuclear deal.

Raisi’s naming of a cabinet and foreign policy team could go a long way to signaling direction. Local media reports said a proposed cabinet could be presented to parliament on Thursday or Sunday.

According to local reports, the two most favored candidates for foreign minister are Ali Bagheri Kani, a stalwart conservative who served as deputy foreign minister under former hardline President Mahmoud Ahmadinejad; and Hossein Amir Abdollahian, a seasoned diplomat.

Without Nuclear Deal, How Close Is Iran to a Bomb?: QuickTake

There’s also the question of whether his foreign-policy team will contain officials with first-hand knowledge of the talks, which could prove critical in determining progress.

Language could prove to be an issue as well. In the talks leading up to the original agreement, representatives became bogged down over issues of protocol and translation. One of the most significant breakthroughs occurred when the parties landed on using English as the common language of negotiation after U.S.-educated Mohammad Javad Zarif took over the Foreign Ministry.

While diplomats reported they were 90% of the way toward reviving the agreement in June, there’s no guarantee that negotiations won’t regress based on the new personalities at the table.