NuGen Medical Devices is going to revolutionize how we take our medicine - BNN Bloomberg
{{ currentBoardShortName }}
Markets
As of: {{timeStamp.date}}
{{timeStamp.time}} 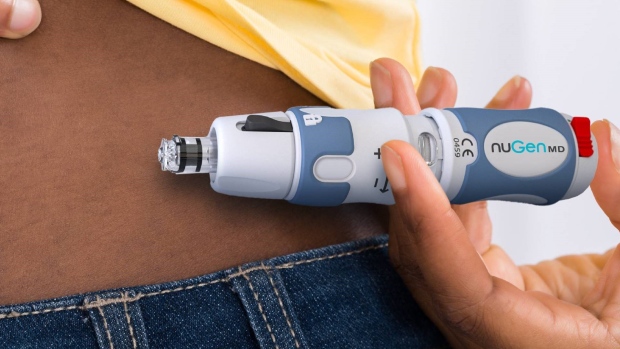 NuGen Medical Devices technology offers a state-of-the art system that virtually alleviates the pain of injections for adults and children with diabetes. , Image courtesy of Market One Media

Many of us have traumatic memories of going to the doctor to get the flu shot or childhood vaccines when we were younger. This feeling isn’t uncommon as 17 per cent of the population suﬀers from anxiety or needle phobia. Your child self wasn’t being irrational either–needles have proven to be a pain for the medical industry as well.

Although the transdermal patch has gained popularity over the years as an innovative way to deliver medicine into one’s system, jet injectors have also made waves due to their benefits in “rapid administration, improved dosing accuracy, faster response rates, better diffusion into tissues, and reduced sharps waste,” according to a report by Grand View Research.

For those who dread needles, a solution is on the way, and it’s becoming a much more pervasive method of delivering drugs, without the associated fear. As needles become outdated, NuGen Medical Devices (TSXV: NGMD) is working on a method to implement needle-free injections with its pipeline of prototypes for the next generation of technology.

The point of needle-free

Being CE approved is particularly impressive as it means that they are conform to all health, safety and environmental concerns in Europe, which are among the strictest inthe world. They have also long been focused on research and development, having acquired Dutch company, European Pharmagroup, to tap into their existing global knowledge base.

“Cross-contamination when handling needles is a major concern globally. Our devices have no needles and do not perforate the skin while injecting, and therefore, the risk of a needlestick injury is eliminated—and when done, it does not require the same costly process for disposal as a biohazard. It can be discarded or eventually recycled.”

The need for needle-free injectors goes far beyond visits to the doctor for vaccines, and the potential market benefit is massive. Some of these applications include potential use for diabetes, dental anesthesia, vaccinations, autoimmune disease, erectile dysfunction, cancer treatments, growth hormones, cosmetics (for injections of Hyaluronic Acid and similar products), and veterinary applications.

Diabetes is especially one of the fastest-growing diseases around the globe – it is estimated that “374 million people are at increased risk of developing type 2 diabetes.” Dr. Ricordi, M.D., and NuGen Medical Devices Advisory Board member, works closely with the company on improving solutions for diabetics.

He explains his involvement, "It is my professional life mission to help people who have diabetes. NuGen Medical Devices’ synergistic mission makes us excellent strategic partners. Their technology allows diabetes patients to inject their medication without needles, with the objective of increasing care plan compliance and improving overall outcomes.”

“I look forward to working with NuGen Medical Devices to positively impact the world through novel drug delivery system development.”

NuGen Medical Devices is bringing to market injectors that can allow for at-home insulin injections, entirely without the usage of a needle. As Michael Wright, CEO and President of NuGen Medical Devices notes, “Cross-contamination when handling needles is a major concern globally.”

“Our devices have no needles and do not perforate the skin while injecting and therefore, the risk of a needlestick injury is eliminated —and when done, it does not require the same costly process for disposal as a biohazard. It can be discarded or eventually recycled.”

Moreover, needles are dangerous and complicated to dispose of, providing a serious biohazard after use. Many viruses can live up to 48 hours on a needle, and special biohazard bins are needed for disposal. With no needle, these concerns vanish.

Not just in science fiction

So how exactly do you inject without a needle? While each product in the NuGen Medical Devices family is slightly different, they all work on the same principle. Regular needles work by puncturing the skin to deliver a pool of liquid into the tissue, but the NuGen Medical Devices needle-free injectors deliver the fluid just under the epidermis in the subcutaneous layer by a fine high-speed jet stream.

Because there is no needle penetrating the skin, there’s a smaller chance of infection. It’s also much more efficient, as the medicine spreads out evenly, rather than creating a “pooling” effect–so in the case of being used for anesthetics, you won’t get that uncomfortable situation where a dentist has to inject you multiple times in multiple places. It also has a much faster uptake. The dermal layer is what protects our body, and our body thus reacts fastest to materials spread into the first line of defense.

The nano-powder is much lighter and easier to transport in larger capacities. Perhaps most revolutionary is the fact that it is significantly less sensitive to heat than many other medical products such as vaccines. The nano-powders have been tested for up to a year at 40 degrees celsius with no adverse side effects.

NuGen Medical Devices’ patented “Nanojex System” painlessly delivers medicines through the skin by using a gas jet to accelerate powdered nanoparticles of drug or protein to supersonic speed with a single-use, disposable, handheld device. This process is also thermostable, so it eliminates the need for a cold supply chain.

It can also target specific skin layers and can inject pure active ingredient of drugs without response delaying excipients or can tailor formulation for controlled release.

Moreover, the NuGen Medical Devices injectors will soon feature Bluetooth and wireless connections so that they can record their usage and transmit them to doctors and pharmacists, even locking the device to prevent incorrect dosages.

NuGen Medical Devices also carries Insujet, which is a self-injectable that can be used for up to 50 injections per nozzle. It harbours the following characteristics as well:

The COVID-19 pandemic truly proves the importance that remote medicine is going to have in the future.

Interest in NuGen Medical Devices has already led to a series of partnerships, joint ventures and endorsements, as the company is searching to make a difference on a global scale. It was joint ventures with pharmaceutical companies that helped develop the key nano-powder described above. These partnerships will allow for a global supply chain to patients across the globe when larger-scale production begins.

Many of those interested in NuGen Medical Devices are major players in global health. For example, Pharmajet, works closely with the World Health Organization (WHO) in adapting needle-free injectors for use in vaccines. The pharmaceutical industry in general has expressed a keen interest in the technology, as it anticipates a future demand for more user-friendly devices – and what’s more user friendly than dropping needles?

Governments have also taken note. Israel expressed its approval of the technology, and former Mexican President and Legal Representative of Centro Fox, Vincente Fox, was so interested that he became an advisor of the company.

The full press release can be viewed here.

He explains, “To Centro Fox and myself, personally, this represents a great opportunity to accomplish our plan of removing the risk of needle stick injuries and cross contamination for care givers, as well as reduce anxiety for patients. Our main driver is to think of patient comfort at the system-level as well as improve home care compliancy. We want to fundamentally change how physicians and patients interact.”

“We also look into the very near future and see the positive impact the NuGen Medical Devices nanoparticle powder injection technology could have on the entire injection market—we can expect a few more partnerships this year and, in the years, to come.”

NuGen Medical Devices is also looking to partnerships to perhaps expand beyond the medicines it already envisions. Studies in collaboration with McGill University are looking to develop a cannabidiol injectable to compete with other drugs for chronic pain and inflammation.

Plans for the future

Wright is organizing private fundraising and is getting ready to take the company into public listing, which is a crucial milestone that investors should keep an eye peeled for. While a lot of focus has been on R&D and partnerships, Wright has expressed his interest in a scalable business, selling not just the injectors but the supply of the disposable syringes and further developed nano-powder injectables.

Clinical testing is also running at full steam on many of their planned products. NuGen Medical Devices was founded with the intention to positively impact people’s wellbeing and it is only warming up to the task. The invention of the hypodermic needle was once a medical breakthrough. One day, however, it may end up in a museum as an outdated relic, only serving as a story to scare our children about how we used to take our medicine.

See how the company’s technology works by watching their YouTube video below.

NuGen Medical Devices recently closed an oversubscribed brokered private placement from $4 million to finalizing $6 million proceeds to be used for sales and marketing of their devices.

NuGen Medical Devices trades on the TSXV under the stock symbol NGMD.

Follow NuGen Medical Devices on social media for the most up-to-date information: