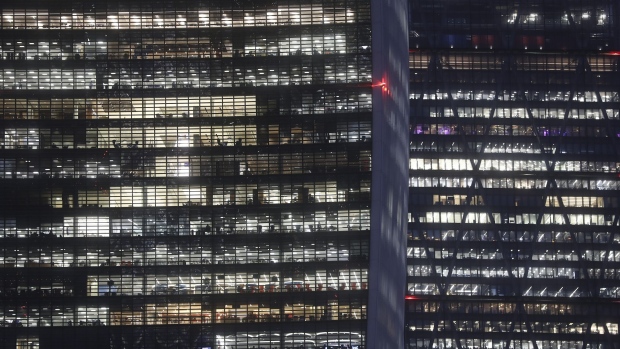 Electrical lights illuminate offices inside a commercial building at night in London, U.K., on Thursday, Nov. 17, 2016. More than 1,900 firms are likely to review their office-space requirements in London following the U.K.’s decision to leave the European Union. Photographer: Simon Dawson/Bloomberg , Bloomberg

(Bloomberg) -- The number of British businesses at risk of going bust rose by more than a third at the end of last year, according to a report by consultancy Begbies Traynor.

Its Red Flag Alert showed a 36% jump in the number of companies in “critical financial distress” in the final quarter of 2022, compared with a year earlier.

The report said it was the sixth straight quarter in which critical distress has worsened. Companies face a toxic mix of stubborn inflation, cash-strapped consumers, rising interest rates and the need to repay debt taken on during the pandemic.

Public and private lenders are taking more action to recover debts, with some increasingly turning to courts, according to Julie Palmer, partner at Begbies Traynor.

County court judgments served against companies approached 24,000 in the last three months of 2022, up by more than a half from the corresponding period a year earlier.

“Strikes are just piling on the pressure as staff struggle to get to work and customers stay away,” Palmer added. “More and more companies are starting to feel the burden of their debts, making directors question whether they can go on.”

Hospitality businesses are particularly at risk of insolvency. Critical distress levels in this sector more than doubled compared to a year earlier, and the situation could worsen come April when the government is set to lower its energy support.