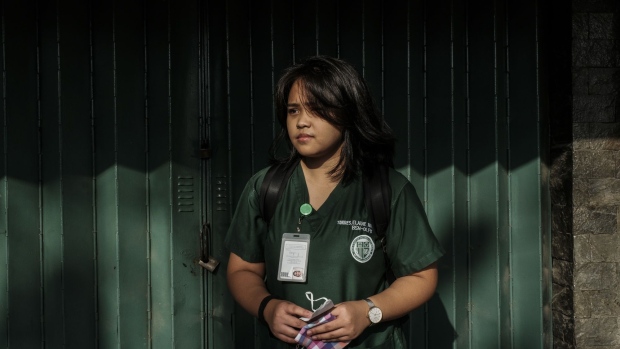 (Bloomberg) -- The toll of nearly three years of Covid-19 includes millions of nurses broken by punishing hours and low pay, many of whom quit the profession and left hospitals dangerously short of critical staff.

Now with pandemic-related travel restrictions easing, countries from Germany to the United Arab Emirates and Singapore are stepping up efforts to lure foreign nurses and other medical professionals with promises of expedited visas and better pay.

Second-year nursing student Elaine Nicole Torres, from the Philippines, wants to help fill that gap -- forecast by the International Council of Nurses to widen to 13 million in the coming years. She’ll graduate at an opportune time, with the global health care staffing sector expected to grow 6.9% a year to $63 billion by 2030, according to Grand View Research.

“You’ve got this mismatch between the supply of nurses and demand for health care,” said Howard Catton, chief executive officer at the Geneva-based ICN. “It has become much more competitive.”

Health professionals have been migrating for decades. The US and UK have the largest number of foreign-trained nurses among OECD countries, but they are more heavily concentrated in other nations. Before the pandemic hit, roughly one-in-four nurses in New Zealand and Switzerland had studied abroad, the highest ratio among the OECD’s 38 member states.

No nation is better prepared to help the world staff up its hospitals and clinics than the Philippines, the single biggest exporter of nurses.

The Philippines isn’t the only option, though. The UAE signed an accord with India in February, which include expedited approval for skilled workers, including nurses. In April, the UAE said it would offer “golden visas” -- which allow workers to live in the Gulf nation for 10 years without a sponsor -- to frontline “heroes” in the pandemic fight and others with critical skills.

That followed separate deals by the UK with Kenya, Malaysia and Nepal over the past year to hire unemployed health workers, with the potential to have some travel and training costs covered.

The World Health Organization has warned of the potential risks from increased recruiting, particularly to developing nations. Historically, there have also been concerns about the human rights and working conditions of employees recruited overseas.

Nurses Who Faced Fines, Lawsuits for Quitting Are Fighting Back

At its annual assembly in May, the WHO asked countries and institutions to ensure they are using ethical recruiting standards so they don’t drain nations of critical personnel.

“Without such efforts, market-led and/or pandemic-driven economic demand for international health personnel may have direct or inadvertent consequences on access to health in other countries,” according to the WHO.

Indeed, the Philippines faces a shortfall of nursing staff, and there’s longstanding political debate over whether so many local nurses should be allowed to leave.

Maria Rosario Vergerie, officer-in-charge of the Philippines Health Department, said that the country’s hospitals and clinics have a shortage of about 106,000 nurses, according to the Manila Bulletin. Vergerie wants to retain a cap on the number of health care workers allowed to go abroad at 7,500 a year.

But new President Ferdinand Marcos Jr. has said he plans to ease that limit. Filipino nurses who migrate typically earn far more than those who stay back to work in the domestic market and, with about 9% of gross domestic product coming from remittances, higher earning health care workers overseas can provide a local economic boost.

Most of the new nursing students, like Torres, have set their sights on foreign shores, with the overseas bidding war for staff seen as a major factor boosting nursing school enrollment.

Phinma Corp., which operates several schools in the Philippines, says the number of freshmen for its four-year nursing program has jumped nearly 400% since 2019 to about 6,000 students, exceeding its projected target for 2025. Another school, Our Lady of Fatima University, also says nursing enrollment is up.

Torres says her degree will open up opportunities for a higher quality of life, adding that she wants to work in a country with better health care systems, hospital equipment and pay.

“It will be very difficult to stay” behind in the Philippines after graduation, said the 19-year-old, who juggles a six-hour round-trip to attend in-person courses at a university in Manila with online coursework at home.

Some experts are warning countries against trying to fix their health care staffing shortages with immigration policies alone.

“There’s a large population” of nurses in the Philippines, “but they will not be able to supply nurses for the rest of the world,” said Gaetan Lafortune, a senior economist at the Paris-based OECD. Governments must also spend more to increase wages and educate and train new nurses domestically, he said.

Australia is one nation pursuing both options. Prime Minister Anthony Albanese’s government is increasing its skilled migrant cap by 35,000 to 195,000. Domestically, the Victoria state government wants to boost the domestic supply of medical professionals, announcing a A$270 million ($175 million) package to “support the recruitment and training of 17,000 nurses and midwives to the health system” starting in 2023.

With so much demand, Torres and her classmates expect to have far more options in terms of countries they can work in after graduation, according to Christopher Tan, the head of nursing school operator Phinma’s education unit.

“Previously students were more focused on working in the US and Canada,” but their horizons are broader now, Tan said in an interview. “Our market has a very astute sense of the demand for work,” he added, referring to the students. “They’re usually two, three steps ahead of us.”