The top executive of the world’s largest fertilizer company sees a worldwide shortage of agricultural inputs ahead as “export challenges” keep Russia and Belarus supplies from reaching global markets.

“Russia and Belarus are just enormous producers of fertilizer,” Nutrien Ltd. Chief Executive Officer Ken Seitz said Thursday in an interview at Bloomberg’s New York headquarters. “There are export challenges in the region. That’s certainly going to have a material impact on the markets.”

Two of the biggest producing nations of potash -- a key type of fertilizer -- ended up exporting less due to trade restrictions and war. Seitz sees shipments from Belarus being at least half of those in 2021, after earlier expecting them to be down by one third to two thirds. The CEO estimates that Russia’s exports are down as much as 25 per cent.

“The world is going to have to look to the other breadbaskets of the world to fill that supply gap for food,” he said.

About 60 per cent of new production that was expected to come into the market over the next five years was in Russia and Belarus, he said, adding that it’s unclear how much of that will come online. Nutrien has said it will ramp up potash output capability to 18 million tons by 2025, a 40 per cent increase compared to 2020. If the market changes, the company can reevaluate additional production, Seitz said.

Fertilizer prices are falling from the highest levels seen in years as farmers postpone purchases to await lower prices, creating gluts that are upending the market for crop inputs. It’s a reversal from earlier this year when prices surged after Russia’s invasion of Ukraine threw the world’s crop-nutrient sector into disarray. Potash had also seen price increases because of sanctions on Belarus. 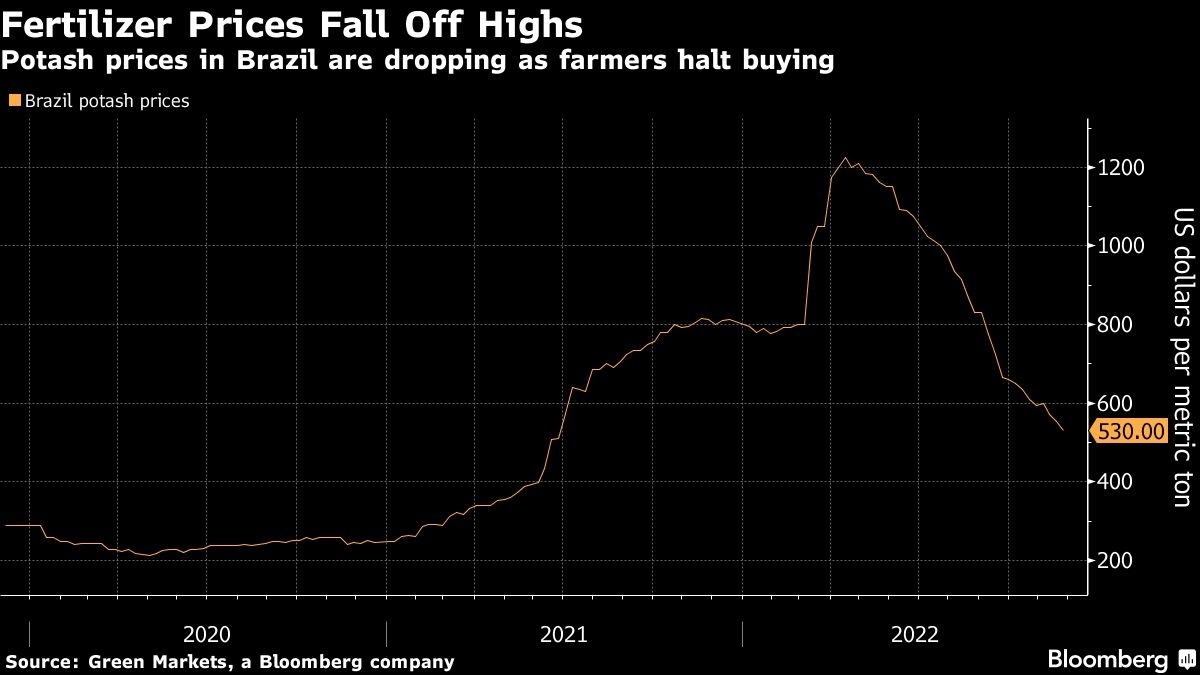 Still, farmers worldwide will need to restock nutrients after they applied most of their stored product this year. Seitz sees global shortfalls lingering well into next year.

“For 2023, we really don’t see any reason why that would change,” he said. “As we watch the trade flows now -- especially given where potash prices are at and have been -- those producers are looking for every outlet that they can find and that they’ve now exhausted those outlets.”

Nutrien is seeing prepaid sales of fertilizer -- where farmers will buy ahead to secure product -- about 15 per cent to 20 per cent higher than in 2020. Seitz is expecting farmers who didn’t buy this year and have used all their stored product to jump into the market and send prices high again.