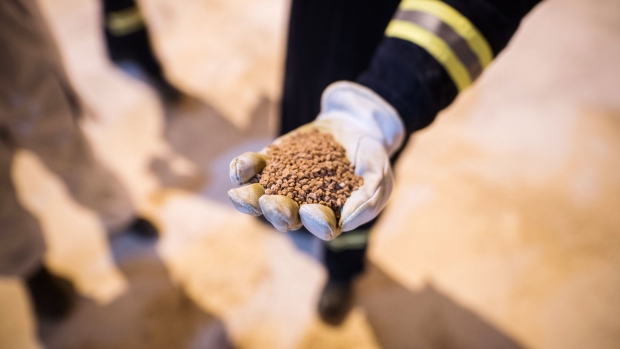 (Bloomberg) -- The world’s biggest fertilizer company Nutrien Ltd. said it plans to boost its potash production by about half a million metric tons more than it previously expected this year amid strong global demand and just days after rival Mosaic Co. was forced to cut output.

The Canadian firm has already sold all of its potash through September based on its original production goals for the year and will require active hiring to boost output across all of its mines, including ramping up its Vanscoy facility in Saskatchewan. The move follows an announcement by its competitor Mosaic to shut two shafts of its flagship potash mine in Canada just ahead of schedule.

“We are responding to strong market fundamentals to ensure our customers have the crop inputs they need to feed a growing population,” said Ken Seitz, Nutrien’s chief executive of potash.

Nutrien expects the higher production to boost its profits in the second half of the year. The move also comes rising crop prices are spurring farmers to use more fertilizer to maximize yields.

Nutrien’s shares rallied as much as 2.2% to a record $65.93 a share. The fertilizer producer was formed in 2018, when Agrium Inc. and Potash Corporation of Saskatchewan Inc. merged.

The company could also benefit with the European Union set to hit Belarus with sanctions which could target that country’s potash and further tighten the global market.

Mosaic was forced to close its mines ahead of schedule because it could have put employees at risk, Chief Executive Joc O’Rourke said at an investor conference call Monday. O’Rourke also said that he expects the global potash tightness to be exacerbated by the loss of his firms 1 million tons of production.

“We believe this tightness will continue well into 2022, as the outlook for new supply over the next few years is relatively limited,” O’Rourke said.