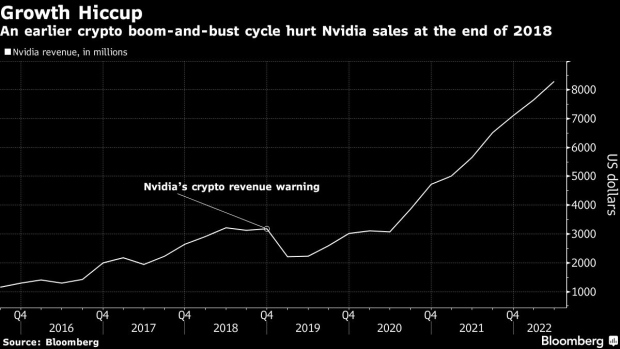 (Bloomberg) -- The turmoil in the cryptocurrency industry has ravaged portfolios and left large and small investors struggling to adapt. It’s also taken a toll on a corner of the tech world that once benefited from crypto’s rise: Nvidia Corp. graphics cards.

Long popular with computer gaming nerds, these cards enjoyed a second life during the crypto boom as an essential component of the systems that generate digital coins. Even as Nvidia tried to limit its exposure to the industry, the crypto rally had helped send prices of the company’s products soaring on secondary markets like EBay.

Now that’s changed. With the value of currencies plummeting, miners see less of a need for expensive computer hardware. Their interest is expected to dwindle further as the popular Ethereum blockchain network shifts to a new method called “proof of stake” that won’t require the same heavy-duty computer processing.

By one estimate, more than a third of the consumer graphics-card market could vanish as crypto enthusiasts abandon the technology. And the products are piling up on EBay’s site and other marketplaces. Though Nvidia’s suggested retail price for the cards hasn’t changed, they’re selling for 50% less on secondary markets than they did in recent months.

A graphics card is a component that fits into a personal computer and converts code into images that can be displayed on a monitor. It’s outfitted with chips known as graphics processing units, or GPUs, which can improve how a PC renders a game.

Crypto miners discovered that gaming gear designed to play Assassin’s Creed or Red Dead Redemption in high resolution could also be harnessed to create new crypto tokens, and that set off a stampede to acquire the equipment.

An Nvidia graphics card with a list price of $1,499 was fetching twice that amount from frenzied buyers. Pierre Ferragu, an analyst at New Street Research, reports that $3 billion worth of graphics cards were bought by miners since the beginning of 2021 and “they are now flushing into the secondhand market.”

The question is how this turnabout will affect Nvidia, which is the biggest provider of GPUs and the most valuable chipmaker in the US. The company has acknowledged that the crypto slowdown has affected demand for some products, and it’s not alone in facing a potential hangover. Advanced Micro Devices Inc., best known for its personal-computer processors, also sells GPUs.

Nvidia has already spent years struggling with how to handle the crypto industry. Though demand from miners has helped fuel sales, the vagaries of the market suddenly made results harder to predict. That came to a head in late 2018 when the company blamed a crypto retreat for a weak forecast. Nvidia warned that revenue would be hundreds of millions of dollars lower than Wall Street projected, sending its shares down 20% in just two days.

The company didn’t want a repeat of that scenario, so it made its gamer GPUs -- sold under the GeForce brand -- less effective at mining. It also released a card designed for the crypto market that can’t be used for gaming. The product lacks the hardware needed to connect to monitors.

Even so, the Securities and Exchange Commission criticized Nvidia for not making its revenue sources clear enough to investors in previous quarters. In May, the agency fined the company $5.5 million for failing to adequately disclose the impact of crypto mining on its GPU sales.

Meanwhile, sales of Nvidia’s new more-targeted crypto products have declined. In February, Nvidia said it had sold just $24 million of them in the fourth quarter, less about 1% of its total gaming-related sales in the period.

That suggests Nvidia’s days as a crypto supplier are already waning. Chief Executive Officer Jensen Huang has said that demand remains strong from gamers, as well as from data-center customers, which use its chips to power artificial intelligence. Nvidia’s total revenue has grown more than 50% in each of the past two years.

That still leaves the company with the aftereffects of the crypto boom. Baird’s Gerra estimates that as much as 35% of consumer graphics cards were bought by miners during the run-up. And many of them are hitting secondary markets -- and potentially eating into Nvidia’s sales.

In the past two months, the price of Nvidia’s GeForce 3080 model fell from $1,100 in late April to $793 on EBay, according to data from MarkSight. That’s good news for gamers, who can now get their hands on the hardware without paying a massive premium or waiting in long lines outside electronics stores.

And the mining market is unlikely to stage a comeback soon. Instead of using computers to generate Ethereum tokens, the technology is shifting to a bidding process. New allotments will be given to those who put up some of their existing holdings as collateral.

On the plus side, the loss of crypto customers will make it easier to gauge demand from Nvidia’s traditional buyers, Baird’s Gerra said.