Nvidia Corp. has an unlikely message for some of its most voracious customers: please don’t buy our latest high-end computer-graphics chip.

The GeForce RTX 3080 Ti, a US$1,199 graphics card, and the RTX 3070 Ti, which costs about half that amount, have had some of their capabilities deliberately stripped out. Nvidia wants them to be the exclusive preserve of its core gamer customer base and is nixing the products’ ability to effectively mine cryptocurrencies like Ethereum and Bitcoin, seeking to discourage miners from snapping up all the supply to build massive crypto-processing farms. Instead, Nvidia is pushing a chip just for the miners.Nvidia’s extreme action is one result of the rising influence of cryptocurrencies, touching on the retail market, the environment and the worlds of finance and technology. Virtual currencies have been in the news as the preferred ransom payment method of cyber attackers. Elon Musk tweets about them more often than he does about his carmaker, Tesla Inc. And as they attract new investors and participants daily, cryptocurrencies have grown more unpredictable and hungrier for the hardware used to generate them.Jensen Huang, Nvidia’s chief executive officer, is swimming against this crypto tide. His company needs to avoid a repeat of the 2017 run-up in demand for its graphics chips, which are the most efficient off-the-shelf chips for solving math problems to create the codes that are the basis of cryptocurrencies. 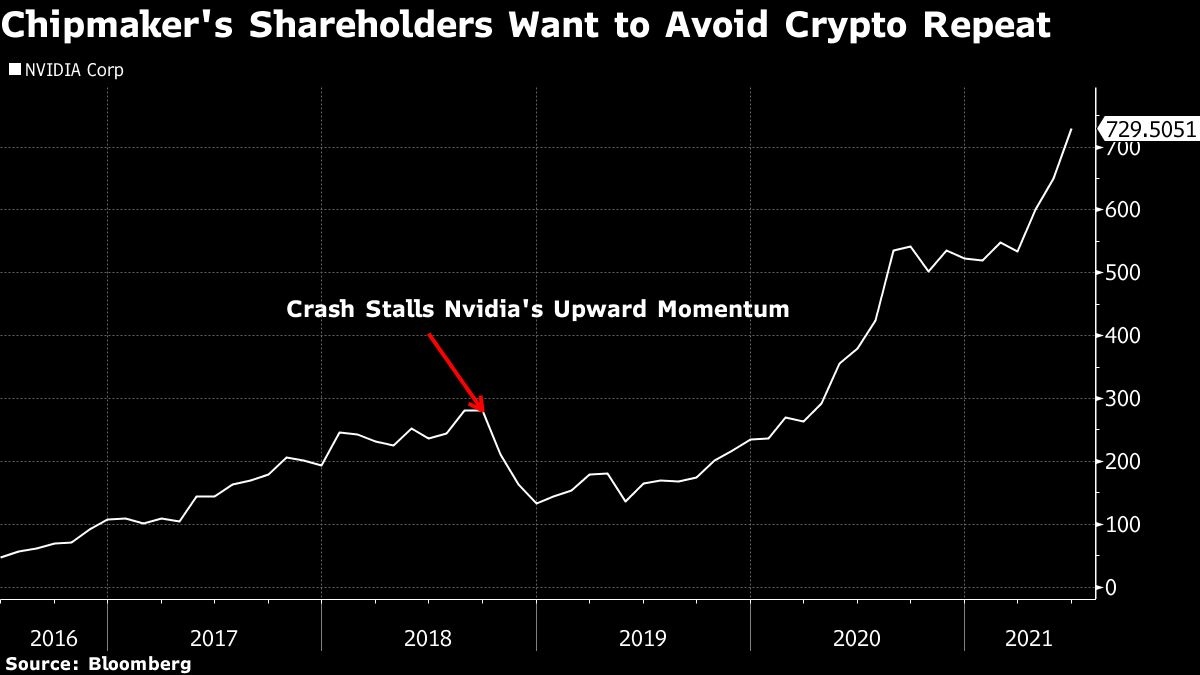 While surging demand is rarely a bad thing, in the past this particular trend has heralded a crash -- when the market price of digital currencies soars, miners tend to move on from graphics cards to pricier custom chips optimized for the algorithm they target. That has left graphics-card makers with a drop in demand even more sudden than the initial surge -- and a glut of unsold inventory made worse by a flood of used cards into the second-hand market as miners dumped them.

In November 2018, having just witnessed such a reaction, Nvidia had to cut its annual sales forecast to US$2.7 billion, falling US$700 million shy of analysts’ estimates. That disappointment caused investors to dump the stock, resulting in a loss of 20 per cent of its price in two trading days.

To hedge against another round of this boom and bust, Nvidia has limited the so-called hash rate on its newest graphics chips and some existing products, a change that makes them inefficient for mining. Importantly, that limitation has no impact on the chips’ ability to make the gaming world more realistic in a way that players will pay heavily for.The problem for the most valuable U.S. chipmaker is the difficulty in knowing exactly how many graphics cards it’s selling to gamers -- a more consistent market with foreseeable surges in demand around gift-giving seasons and marquee game releases -- and how many wind up in the hands of crypto miners. Often, those groups overlap.

Instead of buying finished PCs, crypto miners build a processing infrastructure more akin to a data center or a supercomputer: lots of task-specific components strung together into a unified system. A crypto farm is essentially the biggest accumulation of processors that the miner can assemble to generate tokens. One graphics card is good. Many graphics cards are better.

Jon Peddie Research, which specializes in tracking the graphics card market, estimates that about 25 per cent of the add-in graphics cards -- those built on their own circuit board and offering more power than embedded graphics -- that were shipped in the first quarter of 2021 went to miners or people looking to resell them for a profit. That’s about 700,000 cards, for a total value of US$500 million, the research firm said.Shortages, compounded by the COVID-19 pandemic’s pressure on supply chains and demand across the gaming industry, have led to speculation in the cards. A quick check on EBay and other online retailers shows second-hand Nvidia cards -- of models that preceded the RTX 3080 Ti -- being offered at more than US$500 more than the price Nvidia wants for its new top-tier model.

Nvidia’s GeForce RTX 3080 graphics card first went on sale last September at US$699. In May that part was going for US$2,582 and is currently selling for a premium of 139 per cent over the launch price, according to StockX, an online marketplace that tracks the prices of consumer goods.“The worry from here would be that things could be too good given the pesky crypto environment,” Stacy Rasgon, an analyst at Sanford C. Bernstein, wrote in a research note. “It is admittedly likely true that at least some gaming business is currently being driven by crypto, which has the potential to bring back some unpleasant investor memories.”Rasgon said he thinks the risk this time is more manageable and less likely to yield an unpleasant shock. Nvidia has taken some steps to silo its markets.

Chief among them is the introduction of crypto-mining processors, or CMPs, which Nvidia has created exclusively for miners. A US$400 million chunk of second-quarter revenue will come from them, according to the company’s projections. They can’t be used in computers for gaming or any other conventional graphics-related tasks, Huang said in an interview. That cuts off the possibility of them flooding the secondary market later when miners decide to dump them in bulk as they upgrade to faster hardware.

“With CMP we learned to move faster,” the CEO said. Huang said he thinks he’s inoculated Nvidia from the worst of any potential crash caused by crypto-mining graphics card use and disposal.

Huang said he thinks crypto mining will continue and that the currencies are here to stay. He told reporters at the Computex show this month that he’s hoping that digital currency markets have reached the size that will make the special-purpose chips a worthwhile investment.

Nvidia’s ideal position is one where it benefits from the crypto boom without jeopardizing its core market. It’s a lucrative prospect if the company strikes the right balance, since the CMPs are made from the rejects from its graphics card production. Chips deemed unfit to sell to gamers because of some fabrication or functional flaw would usually be discarded, but because they don’t need their full capabilities to be useful for mining, the company can repurpose them. It’s a bit of added operational efficiency that’s desperately needed at a time when the entire chip industry struggles to secure production capacity.Scale is key to Huang’s optimism about Nvidia getting things right this time. The company’s 2021 revenue will be more than double its 2018 total of US$11.95 billion, according to analyst estimates. Its gaming business alone is now bigger than the whole company in 2018 and it has successfully grown its data center business, with those chips providing 36 per cent of its revenue in the most recent quarter. Nvidia is now bigger and more diversified, and is taking preemptive measures to avoid another crypto collapse.

Still, just like the volatile price of cryptocurrencies and the unpredictable new uses that they’re put to, fluctuations in the chip industry in recent times have grown bigger and more difficult to predict.