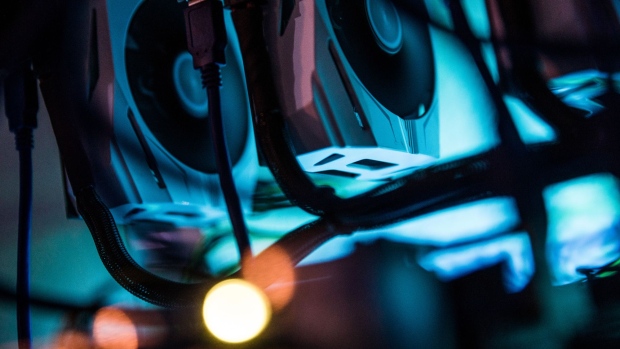 Nvidia Corp. GeForce GTX 1070 graphic processing units (GPU) sit stacked inside a 'mining rig' computer, used to mine the Ethereum cryptocurrency, in Budapest, Hungary, on Wednesday, Jan. 31, 2018. Cryptocurrencies are not living up to their comparisons with gold as a store of value, tumbling Monday as an equities sell-off in Asia extended the biggest rout in global stocks in two years. , Bloomberg

Revenue in the fiscal third quarter was US$3.01 billion and profit excluding certain costs was US$1.78 a share, the company said. Wall Street was looking for earnings of US$1.57 a share on sales of US$2.9 billion, according to data compiled by Bloomberg.

Revenue in the fiscal fourth quarter will be US$2.95 billion, plus or minus 2 per cent, the Santa Clara, California-based company said in a statement Thursday. That compares with an average analyst estimate of US$3.1 billion. Gross margin, or the percentage of sales remaining after deducting the cost of production, will be 64 per cent, plus or minus 50 basis points.

Nivdia said it expects "strong sequential growth" in its data center chip business, offset by a seasonal decline in sales of GeForce notebook graphics chips and other components for gaming systems.

Nvidia shares rose 1 per cent extended trading following the report. Earlier, they closed at US$209.79 in New York.

Chief Executive Officer Jensen Huang has almost doubled the market value of Nvidia since 2017 by finding new customers for gaming chips. But the majority of sales still comes from that market. The use of graphics chips to speed up artificial intelligence software in data centers has been the biggest driver of new growth.

Before Thursday’s results, Nvidia had posted three straight quarters of declining revenue as customers accumulated unused chips and didn’t need to buy as many new ones.

Nvidia’s GeForce chips are particularly popular with serious video-game players who will spend more than the price of a laptop on just one component for their machines. That has helped Nvidia dominate this profitable market. This year, Advanced Micro Devices Inc. introduced new chips -- particularly for more affordable systems -- that are more competitive.

In data centers, while Huang’s company pioneered the use of accelerators to help with AI work, other companies have designed rival components, including the owners of data centers themselves, such as Google.