Nvidia Corp.’s disappointing quarterly revenue forecast sent the stock down as much as 10 per cent, and dragged down the shares of other large chipmakers with it.

Advanced Micro Devices Inc. and Marvell Technology were among stocks that fell more than two per cent in postmarket trading after Nvidia’s outlook, which the company blamed on Chinese supply chain problems and the war in Ukraine. Other decliners included Micron Technology Inc. and Western Digital Corp.

The shares of chipmakers have been pummeled this year amid soaring interest rates and concerns about slowing economic growth that could threaten to leave semiconductor companies saddled with excess inventories. The Philadelphia Stock Exchange Semiconductor Index is down 27 per cent this year compared with a 17 per cent decline for the S&P 500. 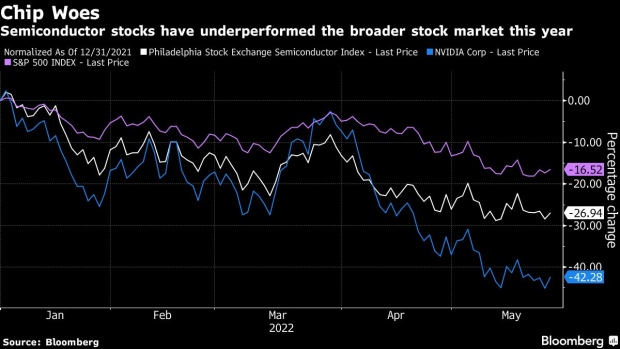 As the biggest US chipmaker by market value and a key provider of semiconductors used in data centers, Nvidia is seen as a bellwether for the industry. The Santa Clara, California-based company helped spark a broader rally in March when it pledged to use free cash to maintain growth with new products rather than pursue more aggressive stock buybacks.

Chipmaker declines coupled with worse than expected results from cloud-computing company Snowflake Inc. late Wednesday could weigh on technology shares after the tech-heavy Nasdaq 100 Index rebounded from a new low for the year during the session.