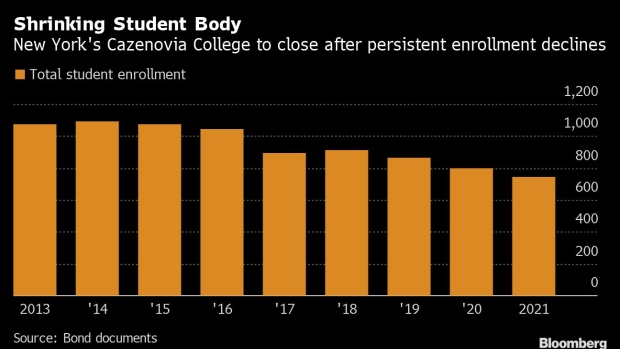 (Bloomberg) -- Just east of Cornell University in upstate New York, the cracks in the US higher-education system are starting to show.

After nearly two centuries, Cazenovia College, a small private school with fewer than 1,000 students, will close its doors at the end of the academic year, citing a financial squeeze from tumbling enrollment.

Unfavorable demographic trends, inflation and the pandemic hampered the school’s finances, it said in a statement. Soaring interest rates compounded the challenges, by making it difficult to refinance the $25 million of unrated debt that Cazenovia defaulted on in September.

The closure is a bad omen for the US higher-education market, where the same economic strains have fueled fears that a broader shakeout is at hand, particularly among small, less-well-known rural schools with modest endowments.

Read more: Between Cornell and Colgate, a Hard Lesson in College Economics

Cazenovia has plenty of company in its struggles. Moody’s Investors Service downgraded the ratings of Regis University in Colorado this week amid “an extended period of declining enrollment and student revenue.” About $653 million of outstanding debt sold for US colleges and universities has defaulted or has payments at risk, data compiled by Bloomberg show.

A spokesperson for Abrdn Plc, one of the holders of Cazenovia’s debt, declined to comment. Representatives for Nuveen, which is another bondholder, didn’t have an immediate comment, while the college didn’t immediately reply to an email and phone message requesting comment.

The college, which was founded in 1824 and features a 240-acre equine facility, said enrollment has dropped by more than 40% from a peak of nearly 1,000 students on campus. Tuition, including fees like housing and a meal plan, is about $51,000.

Competition for students has intensified as a result of New York’s move to offer free tuition at public colleges to lower-income residents. The demographic challenges are also growing, as the number of high school graduates in the state is projected to drop in the next decade.

In an online Q&A, the school tried to tackle some of the thorny logistical issues associated with shuttering a campus.

Student emails will shut off after the school closes. For those who want to continue their studies, Cazenovia has reached agreements with 10 other schools — including Daemen University, Excelsior University and State University of New York College at Oneonta.

--With assistance from Danielle Moran.