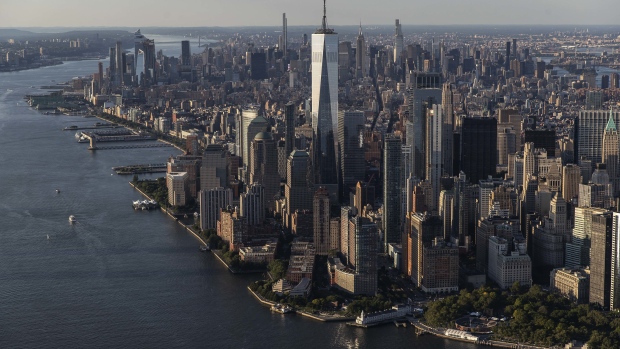 One World Trade, center, in lower Manhattan in New York, U.S., on Thursday June 17, 2021. New York state's pandemic mandates were lifted last week, after 70% of the adult population has now been given at least one dose of a coronavirus vaccine. Photographer: Victor J. Blue/Bloomberg , Bloomberg

The anticipated budget gap for the fiscal year starting July 1, 2022, fell to $2.9 billion, from the $4.1 billion deficit seen in June. New York will get an additional $750 million from a Federal Emergency Management Agency reimbursement this fiscal year.

Gains in stocks powered the city’s $270 billion pension to a 25.8% return in the 12 months through June 2021, allowing it to reduce public-employee retirement spending by $804 million next year and even more in the future.

The pension gains will alleviate risks from $500 million in unidentified annual labor savings, state Comptroller Tom DiNapoli said in a news release. A surge in Wall Street profits in the first half of the year is projected to boost finance-industry bonuses, offsetting weaker wages in sectors such as tourism.

New York City’s rebound from the pandemic has been slower than other major U.S. metropolitan areas, with hotel, restaurant and retail employment hit the hardest. The city’s unemployment rate was 9.4% in October.

The Citizens Budget Commission, a business-backed budget watchdog, said future budget gaps appear “manageable,” but warned that the budget relied on federal aid to pay for ongoing programs and didn’t fund the next round of collective bargaining agreements with unions. The city projects budget gaps of $2.7 billion in fiscal 2024 and $2.1 billion in fiscal 2025.

The city would need to raise ongoing revenue if it wants to continue programs such as more-generous housing vouchers, kindergarten for third graders and other programs, according to the CBC. The group projected a “fiscal cliff” of between $1.3 billion and $4 billion starting in fiscal 2025, when federal pandemic aid is exhausted.

“Ongoing programs are currently being supported with non-recurring funds, creating both near- and mid-term fiscal cliffs,” CBC President Andrew Rein said in a statement. Mayor-elect Eric Adams “should actively manage these gaps starting on day one.”