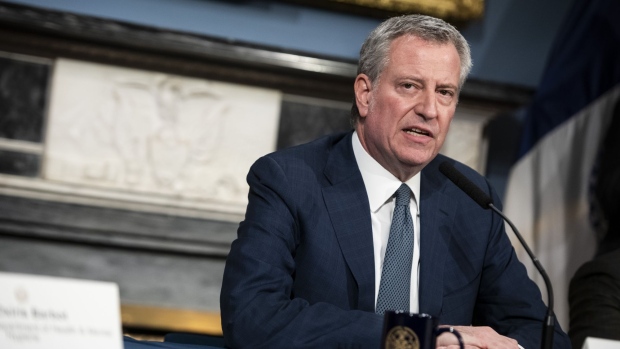 (Bloomberg) -- Some of New York City’s biggest banks and other companies were “blindsided” by Mayor Bill de Blasio’s decision to impose a vaccine mandate on private sector employees, according to Kathryn Wylde, who runs the Partnership for New York City, an influential business group that counts JPMorgan Chase & Co. and Goldman Sachs Group Inc. as members.

De Blasio on Monday said all private-sector employers must require their workers to be vaccinated by Dec. 27, with no test-out option. The mandate will cover roughly 184,000 businesses.

Although many large companies like Goldman Sachs and Morgan Stanley already require vaccination to work from their buildings, Wylde said the city’s decision to impose a mandate wasn’t made in coordination with companies and executives and that it will sow uncertainty among the business community.

“Inconsistent policies at the federal, state and city levels are not helpful and it is unclear who will enforce a mayoral mandate, and whether it is even legal,” Wylde said in a statement on Monday. “President Biden’s vaccine mandate on employers with over 100 employees is currently held up by litigation and it is hard to imagine that the mayor can do what the President is being challenged to accomplish.”

At a briefing on Monday, de Blasio refuted the claim he didn’t reach out to businesses and said there was “a lot of dialog with the business community in advance”