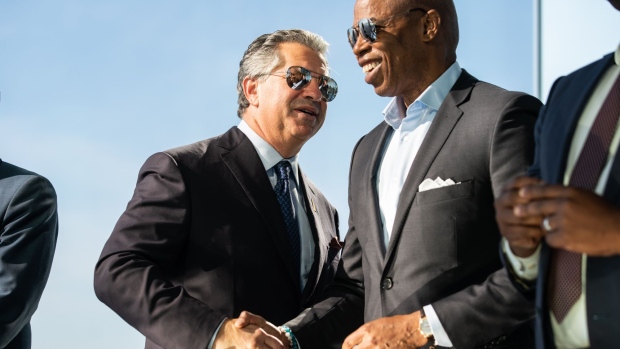 (Bloomberg) -- New York City business leaders are counting on Eric Adams to be the mayor they've hoped for after eight years of being iced out. Adams's proclivity to be all things to all people might derail that fantasy.

The Democratic nominee’s 40-point lead all but assures he will win the Nov. 2 mayoral election against Republican challenger Curtis Sliwa and inherit a city still reeling from a pandemic-induced economic crisis. Less clear is whether Adams, 61, will follow through on promises of affordable housing and better social programs for the lower- and middle-income voters who helped him clinch the primary win, or prioritize the interests of the business elite who have been courting him since.

The former police captain spent most of his early campaign stumping at union rallies and church pulpits, regaling voters with stories of lean times growing up and enduring abuse by cops. By the summer, with a primary win under his belt, a different side of Adams took hold. He was jetting off to Monaco and rubbing shoulders with celebrities from the Hamptons to Martha’s Vineyard. There were nights at the Zero Bond members-only club with Paris Hilton and James Harden. Soirees with crypto billionaire Mike Novogratz. And in September, a pledge at the SALT investment conference to end the “anti-business” rhetoric espoused by Mayor Bill de Blasio.

“He’s definitely said the right things,” said Jared Epstein, a real estate developer who hosted a fundraiser at his Hamptons home for Adams in August. “The harsh reality is that there are major decisions he’ll have to make that would be impossible for everyone to be thrilled with.”

Adams has taken a pro-business stance while also calling himself a candidate of the people. As mayor, it’ll be a challenge to keep both sides happy, particularly as he has to make hard choices about how to revive the city’s flailing economy. Come January, he will need to tackle the housing affordability and homelessness crises, clamp down on crime, and try to re-invigorate near-empty office buildings and a flailing tourism industry. Plus he’ll have to do it all with increasingly left-leaning local politicians elected on promises to make the city more equitable.

Adams acknowledges he’s a political chameleon who lets supporters come to their own conclusions about how they think he’ll govern.

“I’m not going to allow people to pigeonhole me,” Adams said at a rally this month. “When people say, ‘Well Eric, you’re not progressive, you’re moderate, you’re conservative.’ That’s all their creativity.”

A look at Adams’s record on housing gives a sense of how his dual identities have clashed.

During his mayoral campaign, he emphasized creating more affordable housing in wealthy neighborhoods by adding density, a position that's drawn ire from both sides. Critics say that type of building has resulted in a surplus of luxury housing, without creating enough affordable options. Meanwhile, wealthy homeowners often resist large developments that could block their views.As Brooklyn borough president, Adams is responsible for making recommendations on land-use applications — rezonings or special permits that often spur clashes over issues of gentrification, race and class. During his nearly eight-year tenure, he’s given his blessing to about 88% of land-use applications. That compares to 77% for Manhattan Borough President Gale Brewer, who saw a similar number of projects over the same time frame.

Take River Ring, a sprawling mixed-use development on the Williamsburg waterfront. Developer Two Trees Management Co. raced to fast-track an early round of approvals for the 1,050-unit housing project by Adams and the neighborhood’s community board, said incoming City Council member Lincoln Restler. That could help fully greenlight the project, which promises 263 affordable units, before a more progressive City Council takes over in 2022.

The River Ring development shows Adams is “more aligned with real estate than he has been with the community,” said Whitney Hu, director of civic engagement and research at Churches United for Fair Housing.

Not always. Adams has railed on gentrification in front of real estate developers. He told newcomers to “go back to Iowa” because they were “hijacking” apartments. And he’s suggested monitoring landlords like criminals.

In September 2020, Adams sided with the local community board in Vinegar Hill to block a proposed four-story, mixed-use building on the site of a parking lot. Residents were concerned that rezoning the property would set a precedent for taller buildings among the area’s low-rise row houses.

In July, Adams voted against a proposed 18-story tower in Brooklyn’s Prospect Heights where a one-story McDonald’s currently stands due to concerns the building would be too high and too dense.

Some business leaders point to how little is known about a man in public service for more than 25 years. For example, Adams tried to dispel suspicions he was campaigning for New York City mayor while living in New Jersey by inviting reporters into a Brooklyn brownstone apartment he shares with his son and disclosing his toll records.

No matter, said Jeff Blau, CEO of Related Cos., the developer behind the $25 billion Hudson Yards complex. His wife, venture capitalist Lisa Blau, led a $2.4 million effort to persuade Republicans and unaffiliated voters to register as Democrats ahead of the primary. Jeff Blau said Adams’s ascendency sent a signal to the city’s business elite.

“The amount of positive enthusiasm for New York City since he won is off the charts,” he said. “If one of the progressives that were running won, you would’ve seen a mass exodus out of the city. Just before he even did anything, he reversed that trend.”

On the backburner are questions about how to accomplish seemingly contradictory mandates like getting crime levels down while reforming New York’s criminal justice system. Or equalizing public school education while maintaining the city's controversial gifted and talented program. For now, Adams is still basking in the honeymoon phase.

“The opening of One Vanderbilt takes the question, 'Are we okay?' and straightens that question mark into an exclamation point. 'You're damn right we are!'” Adams said, pausing as the room erupted in applause.

Adams and other guests were handed silver aviators to shield their eyes from the stunning glare reflecting off the windows of the 91st floor tourist attraction, high above the Empire State Building. But the sunglasses had the added effect of amplifying Adams’s growing celebrity status.

To a roaring crowd, Holliday said, “New York is back!”