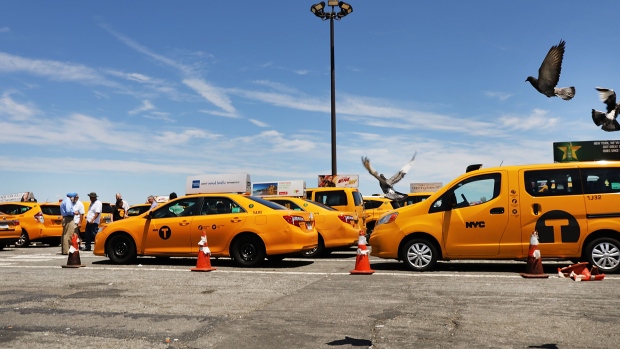 (Bloomberg) -- Bill de Blasio campaigned for New York mayor -- and for president -- vowing to help low-income workers and the least fortunate. But financially desperate taxi drivers, devastated by competition from Uber Technologies Inc. and similar companies, say he has abandoned them.

The 22,000-member Taxi Workers Alliance says it has a plan at almost no net expense to the city: bailing out thousands of struggling drivers who can’t afford to repay expensive loans they took out from private lenders to buy city taxi-operating medallions. De Blasio counters that it would cost billions of dollars to solve the problem and says the federal government should pay.

The plan would have the city take over the loans from private lenders for about 25% of their original value, as some private-equity companies have done. The city’s upfront expense would be $900 million or more, covering about 6,000 financially strapped cabbies owing an average of $600,000 each. But almost all the city’s cost would be recouped as drivers paid off their reduced debts, the drivers’ group says.

“This would save me. I could afford this,” said Mohammed Hossain, 47, who bought his medallion for $854,000 in a city auction five years ago. “This was my dream, to own my business. The bank, the city, all made money on my dream.”

Hossain owes about $705,000 to two banks for a medallion he says is now worth about $100,000. He recently renegotiated with the lenders, cutting in half his monthly payments to $1,500, but extending the loan term to 50 years. He intends to declare bankruptcy in two years when his car lease expires.

About 26% of the city’s cabbies, like Hossain, are contemplating bankruptcy, and more than half are behind on their monthly bills, according to a 2018 report to the mayor. The report contained no recommendations for city-aided bailouts of loans that drivers now say they can’t pay. At least nine drivers have committed suicide in the past two years as the economic crisis has worsened, including one who shot himself outside City Hall’s front gate last year.

The city reaped about $850 million in revenue from sales of 1,000 medallions from 2004 to 2014, promoting them as solid investments before 80,000 Uber drivers hit the city’s streets. That’s why city officials should be responsible for solving the problem, said Bhairavi Desai, executive director of the Taxi Workers Alliance.

“The mayor thinks it would cost billions because they haven’t paid enough attention,” said Desai, who has promoted the plan to the administration and in testimony to the City Council and U.S. Congress. “Soon, we plan to be on the streets in masses so our voices will be amplified and heard.”

The mayor is insisting that any driver bailout would involve direct cash payments covering the full amounts of each loan, a solution that his administration has said would cost as much as $13 billion. He has called on the federal government to take care of the problem.

The mayor has instead touted administration measures such as waiving about $10 million in medallion renewal fees, creating a drivers’ assistance center with financial and mental-health counselors, and placing a cap on the licensing of any more for-hire vehicles.

The mayor’s stance pits him against leaders in the City Council who are willing to spend money to help the drivers. Ydanis Rodriguez, chairman of its Transportation Committee, says he and his colleagues, including Council Speaker Corey Johnson, agree that the city is partly to blame for the problem and for that reason “we bear some responsibility to fix it.”

The proposed debt purchases will be one of several plans that he and others will push during budget negotiations with the mayor that begin next month, Rodriguez said.

Marblegate Asset Management LLC in Greenwich, Connecticut, has bought about 300 medallions and also some loans at a fraction of their original face value, according a company spokesperson who requested anonymity as a condition of disclosing proprietary information.

At Aspire Federal Credit Union, based in Clark, New Jersey, general counsel Robert Bedford said the company would be interested in selling its 75 distressed taxi-medallion loans at a loss. “If the city wanted to talk to us, we would certainly be willing to discuss it,” he said.

To contact the editors responsible for this story: Flynn McRoberts at fmcroberts1@bloomberg.net, William Selway