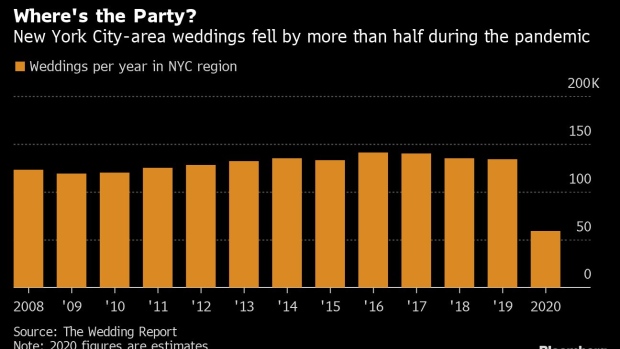 (Bloomberg) -- The first Sunday in September would have been Jenna Sood and Nina Woolf’s wedding day, with 100 friends and relatives reveling at the Brooklyn restaurant where they had their first date.

Covid-19 canceled that. So the fiancees turned their attention -- and the newfound funds in their bank account -- to a different rite of couplehood: buying an apartment.

“Maybe we’re not going to have this amazing party,” Woolf said. “But we have a down payment.”

New York City couples who called off wedding festivities during the pandemic are finding comfort -- and opportunity -- in real estate. Forced to forgo planned gatherings because of social-distancing rules, they’re suddenly flush with extra cash in the best buyers’ market in a decade. So they’re affirming their unions by searching for homes that, in other times, they might not have been able to afford.

“It’s a blessing in disguise,” said Philip Bassis, 34, who canceled a “six-figure” July wedding for more than 200 people in the West Village. “This helped to increase the amount we can put down as a deposit and enable us to get a better place.”

Bassis, owner of a men’s clothing brand, and his now-wife Carly kept their wedding date, but traded the lavish party for an intimate ceremony in Battery Park and a reception for Covid-tested family members on the roof of his in-laws’ apartment building. With all their deposits returned, they’re on the hunt for a one- or two-bedroom, loft-style unit in lower Manhattan for less than $2 million.

“We are long New York City,” said Bassis, who grew up in Manhattan. “This is our chance.”

Their broker, Eleonora Srugo of Douglas Elliman Real Estate, said their circumstance is a familiar one these days. She’s also working with two other Manhattan couples who pushed off 2020 weddings and are using the funds for a first-time home purchase.

Weddings in the New York metropolitan area plummeted 56% in 2020 to 58,522, the fewest in data going back 12 years, according to the Wedding Report, an industry research firm. Couples who went ahead with planned parties spent considerably less on them: The average cost this year was $32,743, also the lowest since 2008.

Meanwhile, owning a New York apartment has gotten more affordable as the pandemic saps demand for urban living. Almost 75% of deals completed from March 16, when New York issued stay-at-home orders, to the end of September were for less than the seller’s original asking price, according to a report by StreetEasy.

“That’s not common in New York City, so you do it when you can,” said John McClave, a Corcoran Group broker who’s working with a couple that dialed back their wedding plans and stepped up their home search. “That window is going to close.”

His clients, Susan Schillinger, 38, and Huy Hoang, 45, canceled two weddings scheduled for April -- a reception in New York and a traditional Vietnamese ceremony with 150 guests along the Potomac River in Maryland. Instead, they tied the knot in August, in separate ceremonies in their parents’ backyards, skipped a honeymoon, then made a bid on a two-bedroom apartment in Battery Park City.

It wasn’t accepted, but they’re out every weekend, searching for the right two-bedroom unit under $1.3 million -- with outdoor space, if possible.

“We want to have a family and we want to live here in New York,” said Schillinger, a kindergarten teacher in lower Manhattan. “Maybe we’ll get married again at some point down the line. No plans for anything immediate.”

Sood, 31, and Woolf, 35, got to work right after sending an email in July to friends and family postponing their wedding. With Corcoran broker Molly Franklin, they hunted for a one-bedroom in Brooklyn for less than $650,000 that would allow their 50-pound boxer-Lab mix, Rosie.

After about 12 apartment visits, they found the spot: a second-floor walk-up near Prospect Park with oversized windows, listed for $495,000. They offered the asking price, made a 20% down payment and signed a contract on Sept. 1 -- the week of their would-have-been wedding. They moved in last month.

“We have a mortgage together,” said Woolf, a hospitality consultant. “So we’re probably more committed than a lot of married couples.”