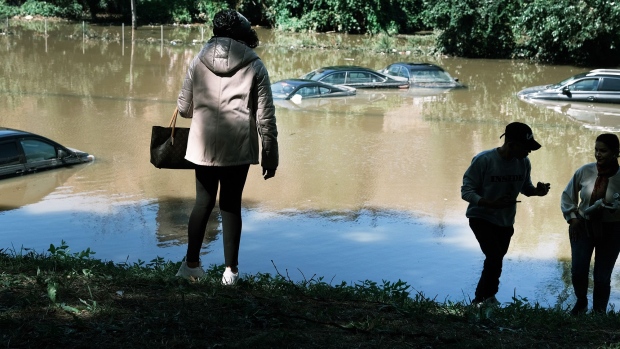 (Bloomberg) -- New York City is bracing for heavy rain and possible flooding, with residents in basement apartments urged to be on high alert after a deadly storm earlier this year killed more than 40 people in the greater New York region.

A flash flood watch is in place and the city issued a travel advisory from Monday night through Tuesday afternoon. In addition to the rain, wind gusts could reach 40 miles per hour (64 kilometers per hour). Heavy rain is set to soak the entire Northeast from New Jersey to Massachusetts.

City agencies are warning people in basements to be prepared to move to higher floors after a September storm, the remnants of Hurricane Ida, killed about a dozen people living in underground apartments. The storm may also bring down trees and power lines, triggering the call for preparation. New York City could see as much as 1 inch of rain per hour Tuesday, affecting both the morning and evening commute.

“We said after the shock of Hurricane Ida that we are going to be changing all the ways we alert the people of the city,” Mayor Bill de Blasio said at a Monday briefing. “Even though this doesn’t seem like a major event, we’re being hyper-vigilant right now.”

A low-pressure system across the Midwest is getting the rain started in the East and will be joined by a second storm forming off the Atlantic coast later this week. There may be a brief respite Thursday before showers begin again Friday.

“Whatever sun you get on Thursday, enjoy it,” said David Roth, a senior branch forecaster at the U.S. Weather Prediction Center.