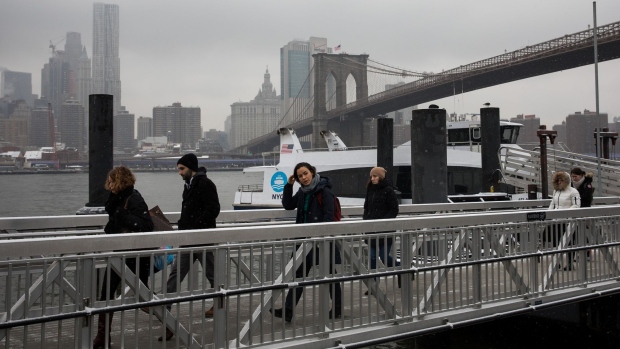 Commuters disembark a NYC Ferry at Brooklyn Bridge Park in the Brooklyn borough of New York, U.S., on Friday, March 1, 2019. A rally in shares of technology companies helped push the broader U.S. equity market up from the lows of the day. Treasuries fell for a third day and oil slumped. , Bloomberg

(Bloomberg) -- New York City’s ferry system, cheered by commuters and tourists as a free-flowing travel option, is much more costly than reported and in need of a financial management overhaul, according to a stinging report released Wednesday by Comptroller Brad Lander.

The audit by Lander’s office criticized the system’s overseer, the New York City Economic Development Corp., for spending $758 million on ferries from July 1, 2015 through Dec. 31, 2021, but reporting only $534 million as ferry-related expenses. The review covers oversight of the ferry system during the administration of former Mayor Bill de Blasio; Lander and current Mayor Eric Adams both took office Jan. 1 after winning elections in November.

“The audit that we are releasing today shows that during the de Blasio administration, EDC failed to provide the transparent, accurate, oversight and financial management that is required of them,” Lander said at a press conference Wednesday.

Lander made 11 recommendations to improve EDC’s oversight, including proposing that there be a new request for proposals for the ferry system’s operator.

“While we welcome many of the ideas and recommendations for improvement, we disagree with others,” EDC Chief Financial Officer Fred D’Ascoli said in a statement. “We believe that relevant data was misrepresented, key facts were misconstrued, or NYCEDC’s contractual agreement with the operator of the NYC Ferry was misunderstood.”

However, the development corporation says it had plans prior to the audit to initiate a new competitive-bidding process this summer as allowed under its agreement with HNY Ferry LLC, also known as Hornblower Group, the operator of the ferries. A Hornblower representative didn’t immediately respond to a request for comment.

De Blasio, a Democrat like Lander and Adams and who served two terms as mayor, is running for Congress in New York’s 10th District.

“We haven’t had a chance to review the full report and recommendations, so I can’t comment on any specifics yet, but if there are issues with underreporting at EDC, or by the ferry operators, that should be remedied and whatever accountability or reforms that are needed should be adopted,” de Blasio said in a statement.

The audit also found that decisions including the early termination of the previous East River route operator’s contract and lack of proper oversight of vessel acquisition resulted in as much as $66 million in unnecessary expenses.

“Concerns around the system’s finances are well known – the prior administration rushed NYCEDC to establish a large and complex ferry system, and we are keenly aware there is room for improvement,” a spokesperson for Adams said in an emailed statement. “We are working actively on an innovative plan to write a new chapter for the ferry system centered on true financial sustainability and access for communities that need it.”

The $224 million in greater costs means that the city’s subsidy of every ferry passenger is almost double the initial estimate of $6.60, according to the audit.

“When hide the ball is played with any amount, but certainly with a quarter of a billion dollars, you can’t have confidence that your city is telling the truth, and providing the information that you need,” Lander said.