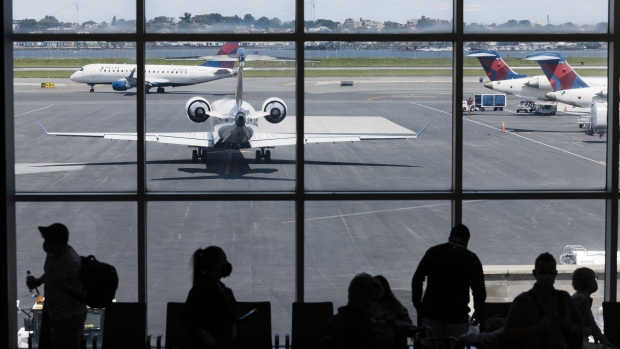 Delta Air Lines planes on the tarmac at Terminal C of LaGuardia Airport (LGA) in New York, U.S., on Monday, Aug. 2, 2021. Citing a surge in unruly passengers, U.S. aviation regulators are calling on the nation's airports to encourage the police to arrest offenders, and to prevent people from sneaking alcohol on board. , Bloomberg

(Bloomberg) -- The Federal Aviation Administration is warning passengers that flights at all three major New York City regional airports may be delayed on Monday evening for two hours due to staffing.

The agency said the flow of aircraft around New York City had to be reduced “to maintain safety.”

The FAA website showed LaGuardia and Newark Airports as experiencing ground delays while JFK Airport was designated as having a departure delay.

The FAA later said in a Tweet that New York City airspace found some additional staffing allowing it to cancel the ground delays, but that passengers should continue to check the latest details with their airlines.