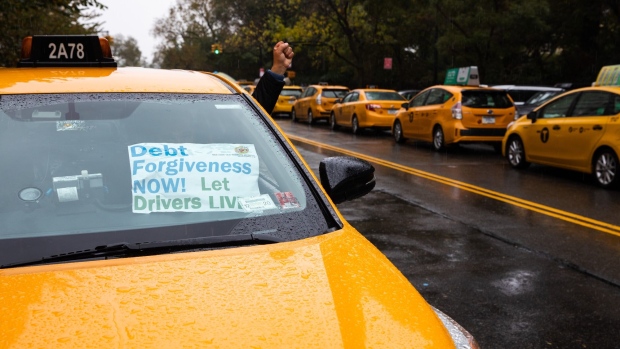 Drivers park their taxis outside Gracie Mansion during a protest demanding debt relief in New York, U.S., on Friday, Oct. 16, 2020. The New York City Council will vote on a bill to establish a new “Office of Financial Stability” within the Taxi and Limousine Commission (TLC) designed to keep tabs on the health of the city’s crumbling yellow cab industry, reported the New York Daily News. , Bloomberg

Last month, the Adams administration finalized an agreement with Marblegate Asset Management, the largest medallion lender in the city, and the New York Taxi Workers Alliance that offers debt relief to more than 3,000 medallion owners. Many struggling drivers can’t afford to repay expensive loans they took out from private lenders to buy city taxi-operating medallions.

“There is something iconic about our yellow cabs,” Adams said at event at City Hall where he was joined by cheering union members and officials including US Senator Charles Schumer and Representative Alexandria Ocasio-Cortez. “It is the foundation of our city.”

Schumer said that because of the deal, “things today are fairer for our hard-working cab drivers.” Bhairavi Desai, executive director of the alliance, cited the number of taxi drivers who took their own lives due to financial strains.

Called “Medallion Relief Program+,” the program allows owners to restructure their loans, putting a $200,000 cap on their debts, with monthly payments limited to $1,234 for no more than 25 years. Under the program, the city makes a $30,000 down payment on the loan and agrees to take on the cost of the medallion if the owner defaults on payments.

The city also extended the deadline for owners to restructure their loans by a week, to Oct. 7.

New York reaped about $850 million in revenue from sales of 1,000 medallions from 2004 to 2014, promoting them as solid investments before 80,000 Uber and Lyft Inc. drivers hit the city’s streets and devastated the yellow-cab industry.

The deal for debt relief was originally reached in November with the administration of former Mayor Bill de Blasio following a 15-day hunger strike by taxi drivers.

“We thank those of you that went on the hunger strike,” Schumer told the crowd.

(Udpates with comment from union leader in fourth paragraph. An earlier version of this story corrected the amount of debt relief.)