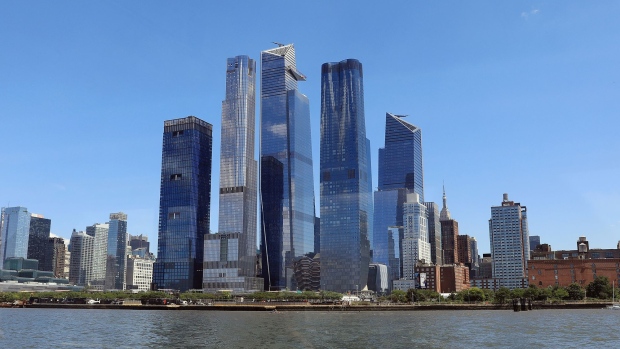 New York is becoming more of a global technology hub, as industry giants tap into the workforce of a region long known as a banking and media stronghold.

News late last week that Amazon.com Inc. signed a lease for 335,000 square feet in the Hudson Yards area comes as Facebook Inc. is gobbling up more space nearby. Google, meanwhile, is expanding beyond its base in Chelsea.

About 10 months after Amazon abandoned plans for a second headquarters in New York, the technology industry is creeping up on financial services as the top employer in the Big Apple. Facebook and Google, which aims to double its presence in New York over the next decade, are now among the top office tenants in Manhattan, joining the likes of JPMorgan Chase & Co. and Citigroup Inc.

“We know they’re not done yet,” Marc Holliday, Chief Executive Officer of SL Green Realty Corp., Amazon’s new landlord at 410 10th Ave., said during an investor presentation on Monday. “These West Coast companies are migrating to the East Coast in order to tap in to an expanded workforce that doesn’t really exist to the same degree in Silicon Valley.”

Even before recent leases by Amazon and Facebook, tech, advertising, and media tenants, known as TAMI, had grown to represent about 24 per cent of Manhattan’s office space, compared with 31 per cent for financial services, according to Cushman & Wakefield. That gap was much wider in 1990, when banks and finance firms accounted for almost 50 per cent of the office market.

Amazon’s new offices can fit more than 1,500 workers and are slated to open in 2021. The deal is a key signal that the company is committed to growth in New York, even without the tax incentives that were proposed to draw a second Amazon headquarters to Long Island City. Those plans were abruptly abandoned earlier this year amid public criticism of the project.

Then there’s Facebook. The company signed a lease last month for more than 1.5 million square feet across three buildings at Hudson Yards, and is reportedly in talks to take over the Farley Building, a former post office across Eighth Avenue from Penn Station that will have 740,000 square feet of office space.

The real estate industry has long tried to position New York as the next Silicon Valley. And while skeptics have argued it can’t challenge San Francisco, a talented pool of workers and boom in venture capital are pushing tech firms to expand in Manhattan.

Venture capital had been a “missing ingredient for putting New York on the tech map,” SL Green’s Holliday said.

“You’ve got a bunch of tech companies across the country that are looking for talent and fighting a war for talent against their local competitors,” said Ken McCarthy, an economist at Cushman & Wakefield. “One way to tap into that is to come to other markets like New York.”