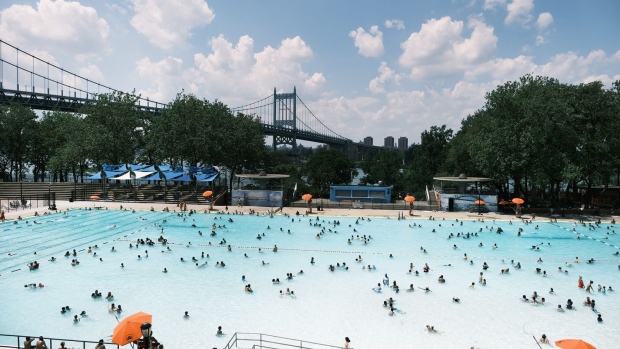 People cool off in a public swimming pool on June 29, 2021 in the Astoria neighborhood of the Queens borough in New York City. , Photographer: Spencer Platt/Getty Images

(Bloomberg) -- New York City Mayor Eric Adams struck a deal with the city’s lifeguard union to raise starting wages by more than 20% to $19.46 per hour amid mounting complaints about a drastic staffing shortage at public pools.

The wage hike, first reported by NBC 4 New York on Friday, aims to curb a shortage that has left the city’s 53 pools and 15 miles (24 kilometers) of beaches with only 778 total lifeguards, just over half of the Parks Department’s stated goal of over 1,400. The boost from the previous $16 wage, negotiated by the mayor’s office since pools opened last week, applies for this summer only, though lifeguards who work each week through the end of the season are promised a $1,000 retention bonus.

“Every New Yorker deserves to safely enjoy our city’s public pools and beaches this summer and my team has taken extraordinary measures to make that happen,” Adams said in a statement Wednesday, stressing that the wage hike is only his administration’s first step to reforming the city’s swimming programs. “We will continue to work closely to correct course on policies that don’t serve New Yorkers and pool resources from all agencies to ensure a fun and safe summer.”

The change comes amid a national shortage of lifeguards, with one in three public pools in the US projected to remain shuttered this summer, according to the American Lifeguard Association. As some cities opened only a fraction of their pre-pandemic facilities, others modified hours or eliminated teaching programs. Nationwide, the association estimates that the pandemic cost cities nearly half a million candidates for lifeguard positions. Prior to Wednesday’s wage hike, lifeguard union workers in New York City were earning below guards at state and federal beaches nearby.

Because of the lack of employees, city programs like Learn to Swim and Senior Splash were canceled for the second year in a row, as the Parks Department said its goal was to prioritize the safety of the millions of New Yorkers who visit the pools and beaches over the “ancillary programming.”

Wednesday’s announcement included a commitment to develop a training program geared at fully staffing the city’s 17 mini pools and followed a step by Adams last week to change the tides on the shortage, as he lifted a 30-year-old rule that barred city employees, including first responders, from picking up work as lifeguards for the summer. The mayor’s office also stated that the city’s fire, police, and emergency management departments may serve as additional resources at pools and beaches.

In a statement, the lifeguard union pledged to continue protecting guards’ collective bargaining rights and boasted that since 2014 no drownings have occurred in the city while a union lifeguard was on duty.

“The most important result of this agreement is that visitors to the City’s pools and beaches this summer will be safe and protected by professional lifeguards who are properly trained to handle any water emergency,” said Henry Garrido, Executive Director of District Council 37, the head of the union that represents lifeguards in the Parks Department.