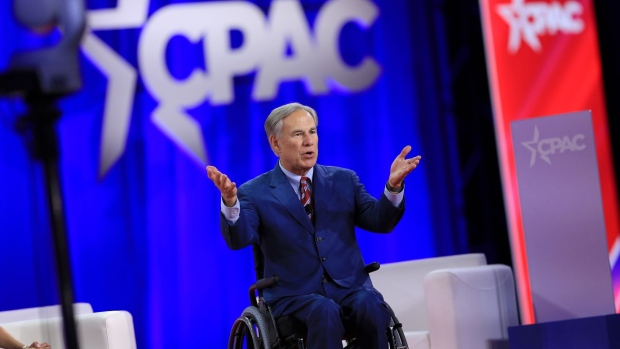 (Bloomberg) -- New York City Mayor Eric Adams blasted Greg Abbott for using migrants as “political pawns” after the Texas governor bused a group of 50 people to the city on Friday. Abbott, who has been sending state-sponsored busloads of migrants to Washington, D.C. for months, said he wanted to test New York’s commitment to being a “sanctuary city.”

“His continued use of human beings as political pawns is disgusting, and an embarrassing stain on the state of Texas,” said Adams spokesperson Fabien Levy in a statement. Adams later called Abbott’s actions “despicable” at an unrelated press appearance.

Abbott sent out a press release on Friday morning announcing that Texas had sent what he called the first bus of migrants to New York City’s Port Authority station. “I hope he follows through on his promise of welcoming all migrants with open arms so that our overrun and overwhelmed border towns can find relief,” Abbott said of Adams. Television footage from Fox News appeared to show a green bus pulling into the city’s bus depot. Volunteers greeted a group of mostly men of Venezuelan descent, according to Fox.

It wasn’t clear which group the volunteers were from or whether the men were seeking asylum or whether they would stay in the city. By 8:30 a.m., they had dispersed from the Port Authority arrival gate. The mayor’s office said it wasn’t notified beforehand and local nonprofits including the Legal Aid Society and the Coalition for the Homeless said they didn’t know about the arrival of migrants before Friday.

“Governor Abbott is shamelessly exploiting these migrants — human beings who have endured immense suffering in their home countries and on the journey to the United States, seeking safe haven and a better life — to serve some myopic political purpose,” the nonprofits said in a joint statement. “Regardless of who these people are, where they are from, or for what cynical reason they are being sent here, New York is a sanctuary and right to shelter city, and the city must ensure that beds and critical services are immediately available to meet any demand.”

Busloads of migrants have long crisscrossed the US, traveling from border towns to destinations within the interior.  But Abbott’s bus caravans are unique because they are part of a state-funded program to transport large groups of migrants across state lines to drop-off destinations unilaterally selected by state officials. In Washington, D.C., the busses Abbott dispatched were filled with migrants who volunteered to take the trip.

Typically, US immigration officials relocate clusters of migrants from overcrowded processing and detention facilities at the border to less-crowded facilities elsewhere in the country. Nonprofits also work with the US State Department’s office of refugee resettlement to transport groups of migrants to locales that have agreed to accept and resettle refugees. Border-town charitable groups sometimes give bus or plane vouchers or tickets to recently arrived migrants so they can join relatives in other states.

Abbott has made cracking down on undocumented immigration a prominent part of his re-election campaign, making regular trips to the border to hold press conferences with law-enforcement officials and issuing statements that blame President Joe Biden's administration for the surge in crossings and chaos along the frontier. He frequently criticizes Democratic politicians in other parts of the country for their open embrace of migrants, arguing that their communities are largely insulated from the burden of dealing with large groups of people routinely released into Texas cities by federal officials.

Earlier this week, Abbott invited Adams and Washington, D.C., Mayor Muriel Bowser to the Texas border to see the migrant crisis firsthand and meet with local officials themselves. Adams declined the invitation. Abbott has also been sending busses of migrants to the US Capital and warned mayors that “there are more busses on the way,” during an appearance at Conservative Political Action Conference on Thursday. He has sent 6,500 migrants since April to Washington.

Polls show Abbott with a mid-single-digit lead over Democratic challenger Beto O'Rourke as he seeks a third term in November's election, though the gap has narrowed in the aftermath of the deadly school shooting in Uvalde. Abbott had 45% support compared with 39% for O'Rourke, a former congressman from El Paso, according to a University of Texas/Texas Politics Project poll taken in June.

Nationally, border security and migrants are a core political battleground, as Republicans hammer the Biden administration ahead of midterm elections to do more to physically stop crossings of people seeking asylum. Biden has also faced pressure from vulnerable Democrats facing reelection to put a stronger emphasis on border security, though he and Vice President Kamala Harris have sought to downplay the political dispute and have focused instead on pacts to ease the economic turmoil in countries that migrants flee in the first place. There were about 207,000 "encounters" -- recorded crossings-- at the border in June, or just shy of 7,000 per day, according to US Customs and border control data. That's up about 10% from the same month a year earlier.

Adams and Bowser both said they’ll accept the migrants but appealed to the federal government for help.

In New York City, about 4,000 asylum seekers entered the shelter system in the past three months, which has been the primary driver of the approximately 10% increase in people seeking homeless services, according to Gary Jenkins, commissioner of the New York City Department of Social Services.

In Washington, Bowser asked the federal government to deploy National Guard troops for help in what she called a “humanitarian crisis” that she expects to escalate. At a press conference on Friday, she said the department denied the request for assistance from the National Guard and that she was considering resubmitting the city’s request to give the Pentagon “some more specific parameters to be better able to respond.”

The White House said there was a process in place to manage migrants at the border and that the federal government would also support Adams and other local leaders through Federal Emergency Management Agency grant funding.

“It's the latest stunt from the governor — another stunt of busing desperate migrants across the country and he's using them as a political ploy. I mean, that’s what he's been doing and it's shameful,” White House Press Secretary Karine Jean-Pierre said at a Friday briefing. “It's costing the state of Texas $1.5 million.”

(Updates to include comments from the White House, Mayor Bowser.)