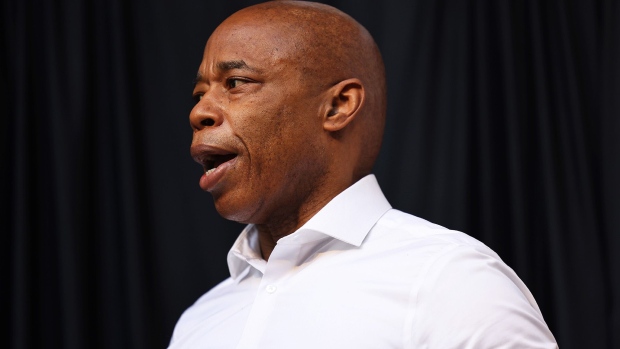 (Bloomberg) -- New York City Democratic mayoral nominee Eric Adams  said he plans to split leadership of the police department into two roles and is conducting a national search for a chief and commissioner.

During an interview at Bloomberg headquarters on Friday, Adams said that all city department leadership jobs “are on the table,” including the possible replacements of Health Commissioner Dave Chokshi and Schools Chancellor Meisha Ross Porter. Appointments will be announced after the November election if Adams succeeds against Republican candidate Curtis Sliwa, he said.

Adams, the Brooklyn borough president, is favored to win the November election to lead New York City, where Democrats outnumber Republicans by 7-to-1.

Adams said he is “not happy” with the city health department. “The Department of Health and Mental Hygiene must think differently about health in our city,” Adams said. “We don’t have a health-care system. We have a sick-care system. We wait until people get sick. And then we treat the symptoms of this sickness.”

Adams said he is in contact with former police commissioners and agency bosses. “We are really focused on getting the right mix,” he said. Adams said he wants a chief to focus on fighting crime, and the commissioner -- preferably a woman, he said -- to be a civilian position focused on rebuilding trust with the community and establishing relationships with businesses.