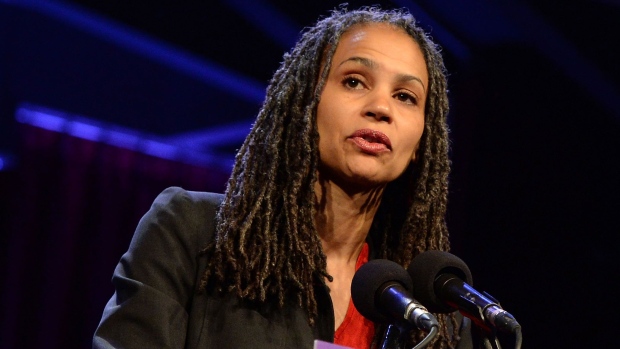 Representative Alexandria Ocasio-Cortez, a Democrat from New York, speaks during a news conference in the Bronx borough of New York, U.S., on Thursday, June 3, 2021. The news conference was held to urge Congress to provide nearly $400,000 to Jacobi Hospital's youth violence reduction program - Stand Up to Violence. , Bloomberg

(Bloomberg) -- National progressive figures are working to boost the candidacy of Maya Wiley for New York City mayor, hoping to pull off a much-needed win for their wing of the Democratic Party as it debates the future.

Those nods added to endorsements by groups such as the Working Families Party, which previously had Wiley as its No. 3 pick; and the New York Progressive Action Network, all aimed at consolidating progressive voters behind a single candidate.

Progressives need a high-profile win to prove their movement has voter support. Despite a series of setbacks in the last several election cycles, the left wing of the Democratic Party has been pushing President Joe Biden to veer away from his natural centrist leanings. A win like New York City mayor would offer a new level of credibility.

Activist Sean McElwee, executive director of Data for Progress, said national progressives are weighing in because the New York City mayoral primary is one of the few opportunities this year for the left to demonstrate its influence.

“This is becoming a referendum on the state of mind of the Democratic voter,” he said.

The push appears to be working. In an Emerson/Pix 11 poll released late Wednesday and taken after the high-profile endorsements, Wiley soared past former presidential candidate Andrew Yang and former sanitation Commissioner Kathryn Garcia to second place, with 17% of respondents ranking her first. Brooklyn Borough President Eric Adams remained in the lead with 23% of first-choice picks.

Adams, a former New York police captain, is in the lead as crime tops voters’ list of concerns and his moderate views on law enforcement are more accepted.

New York’s most progressive mayor in recent memory is Bill de Blasio, but his popularity sank over his second term after failing to deliver on sweeping campaign promises to overhaul the police department, bring universal broadband, reduce homelessness, and achieve property-tax reform. Crime in New York City has also soared in the last year.De Blasio’s main achievement is universal Pre-K, which was only partly funded until the federal government’s pandemic stimulus funds made it possible to open spots to the whole city.

Even as Wiley is enjoying a boost with less than two weeks until the vote, other progressives in the race are faltering.

For her part, Wiley has faced criticism for calling for cutting $1 billion from the New York police budget while living in a $2.7 million historic home in a Brooklyn neighborhood with its own private security.

Wiley said the endorsements were a sign that her campaign has “gained a lot of momentum.”

“I am both humbled and proud that my vision for our city is resonating with progressive leaders and organizations, but most of all with the voters,” she said.

The race is complicated by the fact that voters will be choosing among a dozen candidates using a ranked-choice voting system, in which voters list their top five choices. The candidate with the fewest votes is eliminated in the first round and the rest are shuffled as voters’ subsequent choices are counted.

With no candidate likely to reach a majority on the first round, second- and third-choice votes could be decisive. Because this is the first time the system has been used in New York, it’s unclear how that will play out. The winner of the primary is heavily favored to win the general election in the fall in the overwhelmingly Democratic city.

And a recent analysis from the centrist think tank Third Way and two groups that promote Black and Hispanic candidates blamed Republican rhetoric about socialism and defunding the police for Democrats underperforming in November.

“Progressives in states across the country were a critical part of the coalition that flipped the Senate and the White House, and will be crucial to keeping and expanding the Democratic House majority in this year’s special elections and in 2022,” she said in an email.

Although it is a local office, the top job in New York City has a national profile and recent mayors have tried to use it as a springboard to the presidency, albeit unsuccessfully.

Progressives considered de Blasio’s win in 2013 a major shift after years of centrist mayors but have been frustrated during his tenure.

Sochie Nnaemeka, director of the New York Working Families Party, said that the mayoral race was a big opportunity for the city to “take on the big challenges” such as criminal justice reform that she said keep getting kicked down the road.

“With New York City on the cusp of electing its most progressive City Council, it’s paramount that we have a progressive mayor who can carry out their vision for a more equitable and inclusive city,” she said.