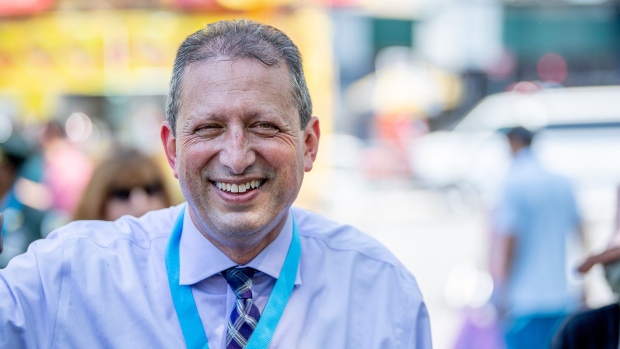 (Bloomberg) -- Brad Lander, the Democratic candidate for New York City comptroller, wants to pump more of the city’s $265 billion of pension assets into apartments for poor and working-class residents, invest in rooftop solar panels and lend to small enterprises owned by women and minorities.

But his ambition to use the pensions to invest in the five boroughs will butt up against law and economic reality. Trustees of New York’s five retirement plans, including the mayor and comptroller, have a fiduciary responsibility to maximize returns for retirees while limiting risk. That means they can’t provide below-market financing.

And with interest rates near record lows, public pensions, including New York City’s, have increased allocations to riskier, higher-returning investments in private equity and speculative real estate. The five pensions for teachers, police, firefighters, municipal employees and school administrators had about $2.5 billion in “economically targeted investments” as of May 31, or roughly one percentage point short of the 2% allocation target.

“The goal here is not only to hit the 2% threshold, it’s to be providing capital that is needed,” Lander, 52, said in an interview. “Finding opportunities to invest in New York City -- in affordable housing, job creation, infrastructure and clean energy -- while achieving that risk-adjusted market return, is a challenge.”

A city councilman who represents the Park Slope section of Brooklyn, Lander beat current City Council Speaker Corey Johnson and eight other candidates in the June primary. In the November election, the Republicans are fielding Daby Carreras, a community leader in East Harlem and financial adviser at Spartan Capital Securities LLC.

With registered Democrats outnumbering Republicans almost 7-1 in the metropolis, Lander, a former urban planner, will likely be elected, becoming the city’s chief auditor and investment adviser to the pensions. The funds target an annual rate of return of 7% on their portfolio of stocks, bonds, real estate and private equity. They’ve earned 10.86% for the five years ending March 31 as U.S stocks boomed.

The pensions have invested almost $4 billion in the five boroughs and six surrounding counties since the Economically Targeted Investments program began in 1981, with the goal of helping to revitalize neighborhoods and develop affordable housing. ETI investments earned 4.86% for the 10 years ending June 30, 2020, compared with a 3.82% return for the Bloomberg Barclays U.S. Aggregate Bond Index, according to the city’s annual financial report.

One of the pensions’ biggest ETI investments is an initiative, called the Public Private Apartment Rehabilitation program, that helps finance the construction and rehabilitation of affordable apartments. The retirement funds have pumped $1.5 billion into the program, which allows developers to lock in fixed-rate 30-year mortgages before construction starts. Working with nonprofits and banks including Citigroup Inc., PPAR has financed the preservation or construction of more than 43,000 units of affordable housing.

But PPAR has been hamstrung by policy changes made more than a decade ago under former city Comptroller John Liu, said Michael Lappin, the former head of the Community Preservation Corporation, a New York City affordable housing lender.

The policy required 30-year loans purchased by the pension to have a minimum interest rate of 4.5%, with mortgage insurance adding another 0.5%. Currently, Fannie Mae and Freddie Mac offer multifamily financing at 4%, although the rate varies by market and borrower, according to Karen Marotta, a spokesperson for Greystone, a real estate finance company.

The pension funds introduced a floor rate of 4.5% because the loans are held to maturity, said Skye Ernst, a spokesperson for city Comptroller Scott Stringer.

“The pension funds offer an interest-rate lock for up to 2.5 years in advance; few lenders offer this long rate lock,” Ernst said in an email. “We regularly monitor comparable products and discuss comparable products to ensure we remain competitive.”

The percentage of ETI assets fluctuates based on both asset performance and overall pension performance, she said. The program hit a high of almost 1.8% of assets in 2016.

Lander said he doesn’t see a reason for an “arbitrary” interest-rate floor and would examine the policy.

“Obviously, in the broader marketplace as interest rates have gone down, banks still find profitable ways to lend,” he said.

Two other candidates are also running for comptroller -- Paul Rodriguez on the Conservative line, and John Tabacco on the Libertarian and Independent lines.

New York City’s widespread lack of affordable housing, soaring homelessness and the potential for an eviction crisis among those who lost jobs amid the pandemic emerged as top issues during the Democratic primaries for mayor and comptroller. More than 450,000 households pay more than 50% of their income in rent, a measure of “severe rent burden,” according to the Citizens Budget Commission.

To preserve affordable housing, Lander wants to use pension capital to expand a downpayment-assistance program that helps non-profits acquire and rehabilitate rent-stabilized and unregulated rental buildings. The interest rate on the loans is currently 3%.

Lander has also proposed using city debt and, potentially, pension money, to finance a new entity called Public Solar NYC, which would install 25,000 solar panels over eight years. The city would buy and install panels and pay property owners rent on them. Public Solar NYC would sell the energy at market rates, generating a return for the pension funds.

“That might be an opportunity to invest city pension funds alongside city capital in a way that will help achieve a really critical goal of scaling up renewable energy and create a lot of jobs right here in New York City and pay a solid return,” Lander said.