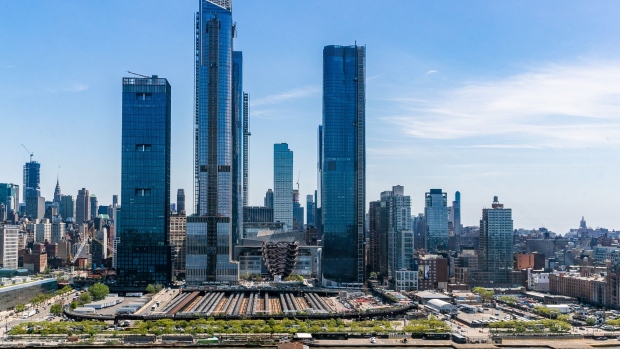 (Bloomberg) -- Hudson Yards, a 45-square block district of office towers, luxury apartments and upscale shops on Manhattan’s far West Side, is paying down its tab with New York City’s taxpayers.

The Hudson Yards Infrastructure Corp., created by the city to finance the redevelopment, has transferred about $663 million in surplus property tax and other revenue to the city since 2017, 80% of which was in the last three years, according to an offering document for a bond sale this week.

The distribution is more than the $360 million the city spent to subsidize the interest payments on $2.7 billion of debt sold by the infrastructure corporation to finance the extension of the No. 7 subway line and a boulevard-lined park. It’s also more than enough to cover $230 million in cost overruns and future planned spending for the new neighborhood.

The city estimates existing and future development in Hudson Yards will generate $27.1 billion from the current fiscal year through 2047, six times more than debt service for the corporation’s bonds.

“Hudson Yards is a financial win for the city of New York,” said Mitch Schwartz, a spokesman for Mayor Bill de Blasio in an email.

Hudson Yards got off to a slow start because of the Great Recession, requiring the city to step in and cover some of the bond payments until building progressed. But in the last decade developers have built or renovated seven offices buildings with three more towers under construction. Ernst & Young LLP, KKR & Co and Tapestry Inc. have already moved into the neighborhood, while BlackRock Inc., Pfizer Inc., and Facebook Inc. have leased space in office towers under construction.

In addition, almost 10,000 rental and condominium units and 8,500 hotel rooms have been built, with more than 25 million square feet of a planned 53 million square feet of construction completed. The district encompasses Related Cos.’ branded Hudson Yards project as well as Brookfield Properties’ Manhattan West.

The development’s progress and reduced reliance on city taxpayers led Fitch Ratings, S&P Global Ratings and Moody’s Investors Service to upgrade the Hudson Yards Infrastructure Corp.’s bonds in advance of this week’s $452 million issue. The debt, backed mainly by property-tax revenue generated in the district, will refinance bonds issued in 2011. Fitch raised its rating on HYIC bonds one level to A+, the fifth-highest grade. S&P raised its rating to AA-, one notch higher. Moody’s raised its rating to Aa2, one level higher than S&P.

Transforming state-owned rail yards and a swath of warehouses and parking lots into a new business and residential district was one of former Mayor Michael Bloomberg’s top priorities. Hudson Yards was rezoned in 2005 and in December 2006 HYIC began selling debt to lay the groundwork for the development. Bloomberg is founder and majority owner of Bloomberg LP.

Developers including Related, Tishman Speyer and Brookfield also received at least $1.4 billion in property-tax breaks, according to researchers at the New School’s Schwartz Center for Economic Policy Analysis.

But critics of Hudson Yards said the city billed the project as “self-financing”. Instead, the New School report pegs taxpayer costs at $2.2 billion so far, including the foregone revenue from the developer tax breaks and spending on a public school and performing arts venue there.

“We are missing the point if we argue that the project would eventually pay for itself,” said Bridget Fisher, co-author of the report, in an email.  “If taxpayers understood from the start they were ultimately on the hook, perhaps they would have preferred to invest $2.2 billion in something other than a luxury development.”

While coronavirus dealt a blow to New York City’s commercial property values, Hudson Yards has fared better than other areas. Property-tax revenue generated in the development that backs the bonds is projected to decline just 6% this year after growing more than five-fold since 2015.

Asking office rents in Hudson Yards average $118.54 per square foot, the highest in New York City, according to Cushman & Wakefield, a commercial real estate services firm that prepared a development and revenue report for this week’s bond sale. Taxable assessed values of four completed towers in Hudson Yards fell less than 1% this year, compared with almost 12% for commercial real estate overall. Occupancy rates in the completed office buildings range from 72.2% to 100%.

To be sure, the pandemic did claim Neiman Marcus, the anchor of Hudson Yards’ tony mall, which filed for bankruptcy in May 2020. Still, the mall makes up about 3% of the overall development. The residential market is still recovering and hotels are struggling.

However, the district’s amenities, eco-friendly buildings with open floor plans, and proximity to the new Moynihan Train Hall and Pennsylvania Station, which is under renovation, have proved attractive to workers and companies, said Nora Wittstruck, an S&P analyst.

“There’s a lot of synergy around” Hudson Yards, said Wittstruck.