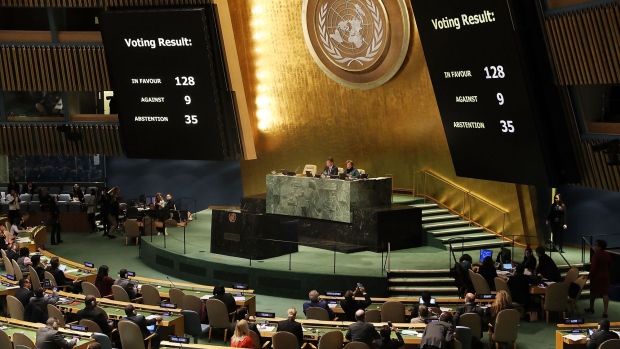 (Bloomberg) -- A scaled-back United Nations General Assembly is returning to Manhattan this week after going completely virtual last year, but fears about a possible spike in Covid-19 cases are making people in the host city less enthusiastic about the annual diplomatic gathering.

New Yorkers, aware of the extra traffic and maze of street closures prompted by hosting more than 100 world leaders and their entourages, might normally embrace the economic boost provided by the event, more than 18 months after the pandemic prompted the city’s shutdown.

But this year’s UNGA won’t be an economic lifeline, and the delta variant is still raging.

“My biggest concern is what happens outside the UN complex,” City Council member Mark Levine said in an interview. “This gathering is famous for all the side meetings in hotels, bars, cafes, and restaurants. Many of these happen without regular screenings, where New Yorkers will be exposed.”

This isn’t exactly the mega-event New Yorkers have grown accustomed to. While 10,000 delegates typically descended on Manhattan in a normal, pre-Covid year, Vijay Dandapani, president of the Hotel Association of New York City, says about 1,000 are expected this time. Countries have agreed to limit their delegations to seven people inside the UN building and side events will be mostly virtual.

Mayor Bill de Blasio pressed the UN to “help us protect the progress we’ve made” fighting the pandemic. Penny Abeywardena, the city’s International Affairs Commissioner, wrote a letter to the UN General Assembly president noting that under New York rules, proof of vaccination should be required for entering UN headquarters. The president of the General Assembly, Abdulla Shahid, responded that he would work to ensure that happens.

But some leaders, such as Brazil’s Jair Bolsonaro, aren’t vaccinated, and the UN has not signaled it intends to stop them from coming in. Instead, UN Chief Antonio Guterres told Bloomberg in an interview that an honor system will be used, meaning diplomats who swipe into the building are attesting to having been vaccinated.

“The number of unvaccinated people that will be there will be very limited,” he said. “All the UN staff supporting the General Assembly is vaccinated,” he added, noting that so far the UN has never been a super-spreader for the virus due to strict measures in place on masks and social distancing.

Either way, the city is providing additional support for UN delegates, such as testing and vaccination on site.

“As the host city, New York City is excited to provide pop-up testing and vaccination at the UN General Assembly,” Abeywardena said in written comments to Bloomberg. “As a national and global leader in embracing the vaccine, New York City encourages all attendees of the General Assembly to get vaccinated to protect not only the participants of this gathering, but the people of New York City as well.”

Broadway Is Back as NYC Pins Covid Comeback Hopes on Culture

The Biden administration is also trying to keep the in-person aspect of the meeting modest. Last month, the U.S. Mission to the United Nations encouraged countries to scale back attendance plans and send pre-recorded videos instead to avoid the risk of a “superspreader event.”

Yet many world leaders are still en route. Among those expected to attend are U.K. Prime Minister Boris Johnson, Turkish President Recep Tayyip Erdogan, India’s Narendra Modi and Bolsonaro, who has derided the use of masks. U.S. President Joe Biden arrives Monday evening and is expected to depart Tuesday after giving his speech from the UN podium.

“For a lot of leaders, it’s an opportunity to show that international cooperation matters,” said Richard Gowan, UN director at the Crisis Group. “It’s also, simply, quite fun to come to New York.”

Last year’s UNGA was totally virtual, dealing a blow to New York’s image as the seat of international diplomacy and depriving hotels and nearby businesses of much-needed income.

Just down the street from the United Nations headquarters, Mirso Lekic, owner of Tudor City Steakhouse, says his restaurant has hosted a few luncheons and events leading up to the UNGA, and he is already getting lots of reservations from heads of states. Lekic says his restaurant will be fully staffed during the event to keep up with the demand.

“Everything is opening up, we need to do our jobs and be preparing just like pre-Covid,” he said.

The partial return of diplomats helps the city’s efforts to lure tourists back and bolster the hard-hit leisure and hospitality industry. Many Broadway theaters reopened last week, with visitors and locals able to return to classics like “The Lion King” and “Hamilton.”

Last year, New York City had just 22.3 million domestic and international tourists, according to NYC & Company, a decline of nearly 67% from 2019, when 66.6 million visitors arrived.

This year, the city expects 36.1 million visitors and has again embraced large-scale events in recent weeks including New York Fashion Week, the MTV Video Music Awards, the U.S. Open and the Met Gala.

“We were the epicenter of Covid but now we are seen as one of the safest places to visit,” NYC & Company Vice President for Global Communications, Christopher Heywood, said in a phone interview. People “coming in for UNGA will have things to see and do in the city. The city is starting to reopen for business in a very big way.”

But for restaurants and hotels in the area, the lack of UN “side events”, which traditionally attract the large crowds of delegates, means modest expectations. The event as a whole might bring in about $1 million in total additional room revenue, Dandapani estimated.

That may not bother William Bruckman, owner of Pietros restaurant in Midtown East, too much. He says the UN event typically makes it harder for his local customers to arrive because of the widespread street closures.

Bruckman described business amid the pandemic as “trying to start a car with a battery that is half charged.”

“It wants to,” he says, “but it doesn’t really get to that point where it is going to start.”