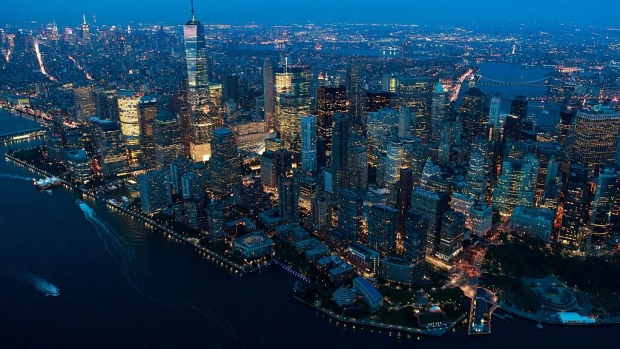 (Bloomberg) -- New York’s Financial District is suffering as a glut of office space builds with the pandemic keeping workers home.

JPMorgan Chase & Co. is the latest high-profile tenant to look for an exit from the neighborhood, a historic part of lower Manhattan that is home to the New York Stock Exchange and Federal Reserve.

S&P Global and Fitch Ratings Inc. are also marketing big blocks of offices, driving an 80% surge in the amount of sublease space available. That’s more than double the rate in Midtown, according to data from CoStar Group Inc.

Manhattan’s office market has taken a big hit in the past year, with the pandemic emptying out skyscrapers and pushing cost-conscious companies to reconsider how much space they need after months of remote working.

In Midtown, where there’s been a 36% increase in sublease space, roughly 18% of office space is currently available, either because it’s empty or a company is trying to unload it.

There’s a similar amount space for rent in lower Manhattan. The area had been clawing its way back after being battered by the 9/11 terrorist attacks and the global financial crisis. In 2011, when the magazine publisher Conde Nast announced a move to the rebuilt World Trade Center from Times Square, it was a pivotal moment in the bid to draw companies downtown.

Now, the company is eyeing office space in New Jersey and elsewhere in Manhattan as it tries to renegotiate or exit its lease at One World Trade, where it has about a million square feet. Uber Technologies Inc. is also looking to shed space, at 3 World Trade Center, where it signed a lease. That’s pushed the amount of sublease space up 73% in lower Manhattan, which stretches north to Chambers Street.

The Durst Organization and Silverstein Properties, both landlords at the World Trade Center complex, argue their available space is more competitive because the towers are newer and higher quality than others in the area.

One World Trade is 90% leased and asking rents are at $75 a square foot with regular tenant improvement concessions and free rent, said Eric Engelhardt, senior managing director of commercial leasing at Durst.

“What’s happening in this market and in other downturns in the real estate market is flight to quality,” Engelhardt said. “Tenants in this market, especially post-pandemic, are looking for healthier, newer, inspired spaces to encourage their staff to return to the office.”

In the Financial District, one building taking a hit is 40 Wall St., the 72-story skyscraper owned by former president Donald Trump. Revenue fell at the building in 2020 as tenants looked to exit leases due to pandemic-related office closures.

The office tower, where construction started in 1929, has also been tarnished by the Trump brand. The Girl Scouts’ New York City chapter has been exploring options to leave the building as it looks to distance itself from Trump after the deadly riot at the U.S. Capitol.

A spokesman for the Trump Organization said two new leases were recently signed at the building, which is more than 90% leased.

Still, the surge in office supply is putting pressure on landlords. Average asking rents in lower Manhattan fell to $61.59 a square foot in February, the lowest since 2016, according to the brokerage firm Colliers. The prices for subleases are often lower, ranging from $30 to $60, CoStar data show.

Concessions are rising, including more rent-free months on shorter leases and growing allowances for improvements. Incentives are also ramping up for brokers, with landlords offering free Amex and Visa gift cards just to get their spaces shown.

“There’s been a disruption clearly throughout Manhattan and downtown is not insulated from that,” said Jim Wenk, a vice chairman at Savills North America. “It’s going to be a very choppy period for the foreseeable future.”